SCOTT ALLAN has accused Celtic of treating him unprofessionally during his four years at the club.

The midfielder quit the Hoops at the end of his contract last month after agreeing a pre-contract with Hibs in January.

Allan reckoned the simmering ill-feeling between the champions and the Easter Road outfit scuppered his chances of a loan switch to the Edinburgh side when it was obvious there would be no first-team opportunities at Parkhead.

The 27-year-old playmaker, who agreed a three-year deal for his third spell at Hibs, admitted he was bitterly disappointed a temporary switch was blocked at the turn of the year.

There appeared to be animosity between the clubs following the breakdown of the proposed deal for John McGinn who looked to be heading to Glasgow before a dramatic late move to Aston Villa.

Asked if he thought that poor relations had been the stumbling block in any shift, Allan, speaking to the Evening Times, answered: “I think that is the issue, definitely.

“I just assumed it would happen because I was surplus to requirements. I did not understand why I was not allowed to go. I was just assuming I was coming back, but I wasn’t allowed. I don’t know what the script was.

“On deadline night, I was battering my phone – but nothing happened. I don’t know why. There were other factors, obviously between the two clubs, and I was in the middle of it. It just wasn’t to be.

“When I was being lined up to come here in January, the fact that it didn’t happen was nothing to do with me. I wanted to leave. But it was between the two clubs, the fact that I wasn’t allowed to leave. It wasn’t like there were higher forces working against me or anything. I was just the guy caught in the middle, caught between the clubs.”

The former Dundee United and West Brom player was also scathing about the lack of game-time at the Hoops. 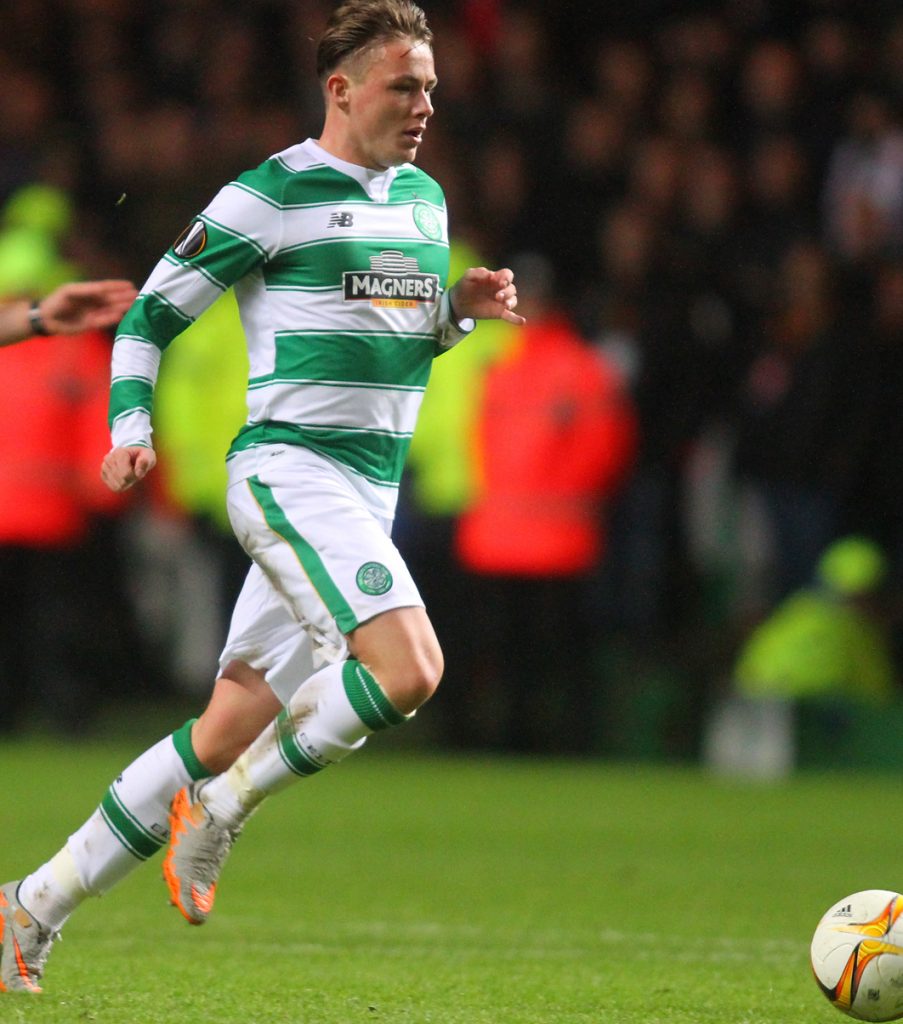 NOW YOU SEE ME…a fleeting appearance from Scott Allan against Ajax in November 2015.

He said: “If I got a run of three or four games, which I never got even in the Ronny Deila era, and didn’t do it then you can hold up your hands and say you did not take your chance, but it was never there for me.

“Ronny left after the first season, but I don’t think it was him who signed me in the first place. It was just one of those things.

“I just never got the chance, so I never got the answer as to whether I would have done well or not. Every other player in that squad got at least two games to show what they could do. I never I got that. It was strange to me.

“Did I ask why? I did, but when teams are doing trebles, you have to take your hat off to them. But I thought there were still chances where I could at least get a wee sniff.

“Latterly, everyone knew I was looking to leave. There were young lads coming through that they would rather give the opportunity to look to break into the team.”

Allan added: “I felt I dealt with it really well, kept my head, didn’t chuck my toys out of the pram. I felt players like Cristian Gamboa and Marvin Compper did the same. We could hold our heads high because we were utmost professionals, regardless of what happened.

“The relationship with Brendan Rodgers was fine, respectful. It was hard for me to argue about not playing because the boys there had done such a good job over the previous three years. It was more about wanting a clear programme for what you were doing for the season; that was the frustrating thing. But you can’t complain too much when the team has won nine trophies in three years.

“Do I think I was treated professionally? Not 100 per cent of the time, no. Definitely not. In football, when you are playing, you are part of the squad. When you aren’t part of that, it is easy to be cast aside and forgotten about. That’s just how it is.

“When he (Neil Lennon) arrived, he said he would get me game-time. He did feel sorry for me. Me and a few others, like Christian Gamboa, a great professional who never got a sniff after December. But it wasn’t to be.

“Celtic have young players coming through and would obviously rather give game-time to them than someone guaranteed to leave,”

Allan made only three starts and 14 substitute appearances during his ill-fated stay at the club that also saw loan moves to Rotherham, Dundee and Hibs.