JOZO SIMUNOVIC admits he could say he is “angry and sad” at being released by Celtic.

However, the Croatian defender respects the club’s decision not to take up the option of another year on his contract and allow him to move on.

Simunovic, though, is gutted he will not be part of the Hoops squad as they attempt to make history in the new season with a tenth successive title.

The 25-year-old central defender, speaking to the Scottish Sun, said: “It’s a bit weird as I was at Celtic for five years and was a good part of the success.

“My wish was to stay for one more year minimum, as we have a good chance to do something historic.

“To win 10 in a row would be a great achievement and I’d remember it for the rest of my life. 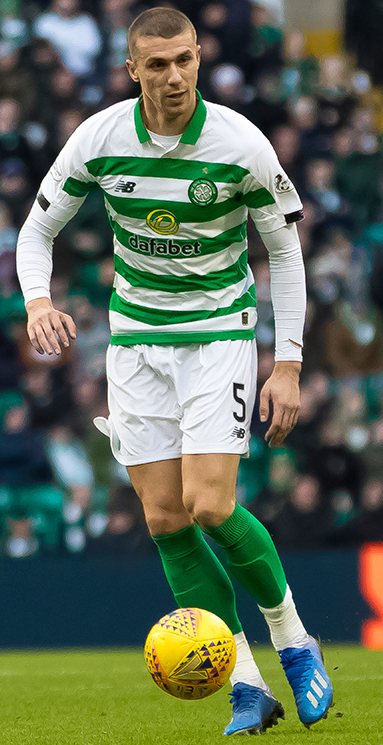 ON THE BALL…Jozo Simunovic won five titles at the Hoops.

Simunovic, whose career at Parkhead has been hampered by injury since Ronny Deila bought him from Dinamo Zagreb for around £3million, continued: “I have been a big, big part of Celtic and the success there for the last five years. I also think of the boys who left last summer and the summer before.

“We have all played a big part in Celtic’s run to nine in a row and that will never change.

“I cannot look back with bitterness because I had the chance to have five years at a great club.

Simunovic admitted it was difficult not getting the opportunity to say a proper farewell to the rest of Neil Lennon’s squad.

He added: “When it was announced that Jonny Hayes and I were going to leave, it was a hard time for us.

“Everyone who has experienced something like this will know that it’s not easy – but it’s part of football. It’s not great for both of us, but what can we do?

“If we had the choice we would have stayed, for sure. But the club has to do what they want.

“I will miss my team-mates, but I got the chance to say goodbye online to them.”