Celtic Quick News on News Now
You are at:Home»Latest News»‘ANY PROPER CELTIC PLAYER WILL BE BUSTING A GUT ON SUNDAY,’ INSISTS EX-STAR
By CQN Magazine on 29th April 2021 Latest News

The Hoops head for Ibrox for a High Noon shoot-out against Steven Gerrard’s side for their fifth confrontation with the Govan club in a dreadful campaign.

Not much has gone right for the fallen champions following a summer that promised so much. The quest for a historic tenth successive title was blown far too early and a feeble performance in the 2-0 loss in the derby in October at Parkhead was part of the early stumble off the Premiership rails.

It didn’t get much better when Callum McGregor deflected in a right-wing corner-kick for the only goal of the Januery 2 encounter and the monotonous inability to deal with set-plays gifted Gerrard’s men a goal in the 1-1 draw last month after Mohamed Elyounoussi had put the Hoops ahead with a flying header.

That was followed by some more dismal defending in the 2-0 Scottish Cup exit earlier this month where on-loan Everton defender Jonjoe Kenny contrived to score the killer second goal with a wild lunge at a cross at the near post. The visitors’ cause wasn’t helped with a powderpuff penalty-kick attempt by Odsonne Edouard that was pushed away by Allan McGregor with a fair degree of comfort. 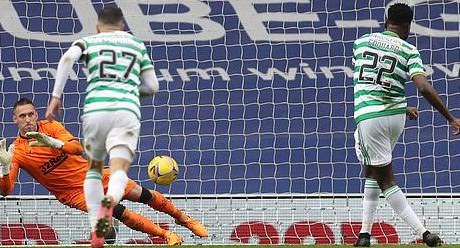 SPOT OFF…Odsonne Edouard fluffs his penalty-kick at Ibrox with Allan McGregor making an easy save.

One-time Celtic and Scotland international frontman Donnelly knows only too well the anguish of a miserable sequence of results against the Glasgow rivals and went an entire league season without a derby victory in 1997 when Walter Smith’s team celebrated nine in a row to emulate the feat of Jock Stein’s legendary side which kicked off in 1966 with their first crown in 12 years.

Now, 24 years on, the ex-fans’ favourite hopes John Kennedy’s men can stop the rot. Not since the terrible John Barnes era 21 years ago have the Hoops failed to get a victory in a Glasgow encounter.

Donnelly said: “I think it’s time for Celtic to deliver a win. Believe me, it’s not a great feeling to go through a whole season without beating Rangers. For me, it was a horrible experience.

“You always want to put one over your main rivals and not doing it even once sealed our fate in the league that year.

“It made it all the sweeter when we got the better of Rangers to win the title in 1998. We had started to bring in some quality players, guys such as Pierre van Hooijdonk, Paolo Di Canio, Jorge Cadete and Andy Thom.

HEADS I WIN…Mohamed Elyounoussi dives full-length to beat Flip Helander to the ball to rocket in Celtic’s goal in the 1-1 draw.

“But Rangers were strong from goalkeeper to striker and we found it tough. There were a lot of those matches where the pattern of the play meant we would have a lot of the ball and we’d be comfortable in the game.

“Then, suddenly, they would score and knock the stuffing out of us. Brian Laudrup, Ally McCoist or Paul Gascoigne would break up the park and put the ball in the net.

“It almost felt like they had the Indian sign over us. It became psychological for us. We were thinking: ‘How can we beat them?’.

“Rangers would take the lead against the run of play and immediately we would fear the worst.

“We beat them 2-0 in the Scottish Cup with goals from big Malky Mackay and Di Canio and it felt like a huge moment. Frustratingly, I was in the stand that night.

“But Rangers were just too strong for us in the league and I was involved in all four games.”

Donnelly, speaking to the Scottish Sun, continued: “Right now, I think Steven Gerrard’s side have a stronger mentality. They have a real conviction about them in derbies. 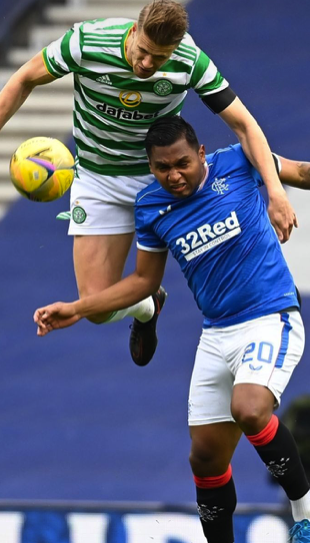 HIGH AND MIGHTY…Kristoffer Ajer rises above Alfredo Morelos to clear the ball.

“It doesn’t seem that long ago Celtic were 5-0 up against them at Parkhead with half an hour left. The final result that day could have been anything.

“And you have to remember when Celtic won 3-2 at Ibrox with 10 men, that completely shattered Rangers.

“But credit to Gerrard, he’s flipped that now. It’s the Rangers players who believe they’ll win every time.

“Celtic had plenty of chances to win the last derby in the Scottish Cup and didn’t take a single one. It was like they were playing in hope, while Rangers were sure they’d win.

“During my time, we were up against Andy Goram in inspired form. Now it’s Allan McGregor.

“Rangers are going through a dominant period in the derbies and that momentum in football, as in most sports, can be powerful.

“I really hope Celtic can respond on Sunday and also stop them from having an unbeaten league season.”

Reflecting on the Cup defeat that derailed any hopes of a fifth consecutive triumph on the competition, Donnelly added: “I thought there was a real lack of belief.

“Celtic had a good number of chances, but Odsonne Edouard and Mohamed Elyounoussi were poor with their finishing.

“They didn’t look like they believed they would score. 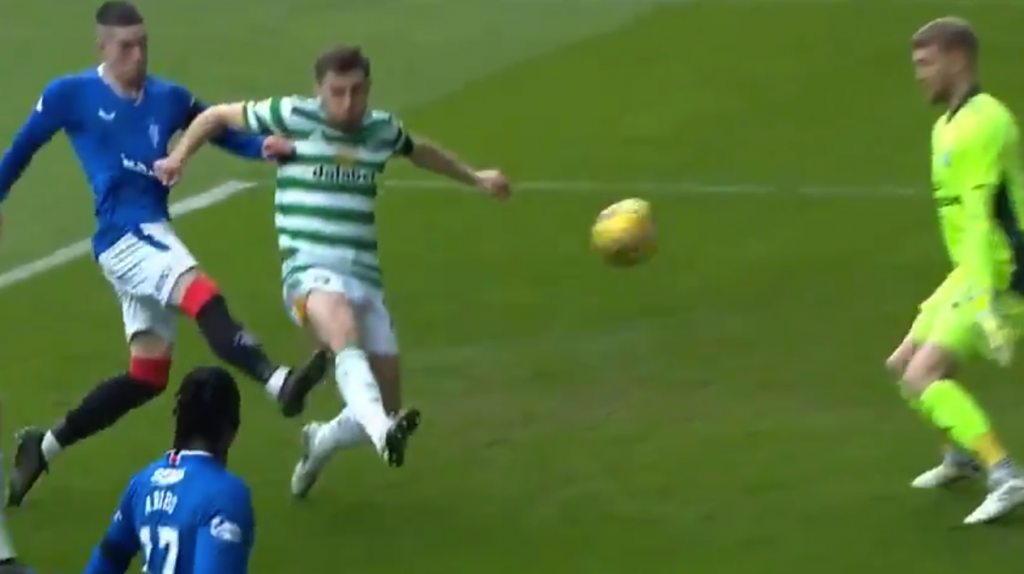 OWN GOAL HORROR…Jonjoe Kenny blasts the ball past a helpless Scott Bain.

“The Celtic players lack belief because of how the season’s gone. There wasn’t a lot in the Cup game. The difference is the confidence Gerrard’s side have.

“A year or two ago, the chances Celtic had would have been in the back of the net.

“But it’s all turned and that’s why we’re now looking at a 20-point gap in the league.

“I look at the Celtic defence and it appears to me they are just playing on their own, not as a unit.

“I felt the full-backs at Ibrox were playing within themselves, be it through fear or lack of belief. The conviction was with Rangers.

“Any proper Celtic player will be busting a gut on Sunday, to avoid a full season without a single Old Firm victory.

“I remember beating them 3-0 at Hampden in the mid-90s. Rangers were dominating us and were assured of being champions again.

“We treated it like it was a Cup Final.

“It was about pride playing for Celtic. We had to go out and give Rangers something to think about.

“Now it’s the same for John Kennedy’s players. They need to put a seed of doubt in the minds of their opponents for next season.”