A Championship chasing Celtic thumped tomorrow’s opponents Hearts 6-0 on April Fools Day in 1981 and how the Jungle loved it!

This was an exciting Celtic side with Pat Bonner in goals, a back four of Danny McGrain, Mark Reid, Tom McAdam and Roy Aitken; the midfield comprised of Dom Sullivan (who had a smashing game), Murdo MacLeod and Tommy Burns. The front three were Davie Provan on the wing, George McCluskey and Frank McGarvey. On the Celtic bench were Mike Conroy and Charlie Nicholas. 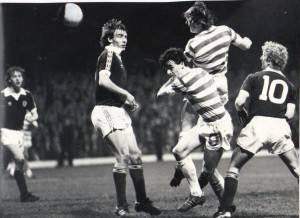 Manager Billy McNeill preferred McCluskey to Celtic’s emerging superstar Charlie Nicholas for this game and the player the supporters called ‘Chicken’ certainly took his chance scoring two and making three others in a superb individual performance.

Celtic’s goals came from McCluskey and Macleod who both grabbed doubles with he other goals being scored by Provan and McGarvey.

This was a midweek, evening match but when you consider the size of crowds in the modern era, the size of the crowd at Celtic Park 35 years ago today is rather surprising. Tomorrow Celtic will attract around 50,000 Celtic supporters as they chase three points that will edge us closer to the title. In 1981, again as we chased the league flag, the attendance was a mere 13,300. 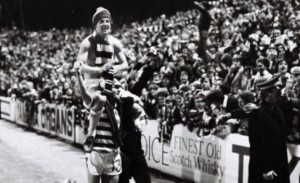 Still that relative small crowd, not unusual in those days, did not dampen that atmosphere in the centre of the Jungle.

While it may be a day too late it would be nice, 35 years later, to hear that wee song again tomorrow and for Celtic to hit Hearts for six.

Incidentally after the 6-0 win against Hearts on April Fools Day, Celtic went to Firhill 4 days later and picked up the two points with a 1-0 win. We then draw 0-0 against Dundee United in the Scottish Cup quarter final at Hampden before going back to the national stadium the next midweek losing 3-2. We then headed to Ibrox and put the cup disappointment behind us by beating them with Charlie Nicholas scoring the only goal (see highlights below).

That win set us up for a trip to Tannadice on April 22, and what a night that was! Celtic won a memorable match 3-2 getting revenge for the cup defeat and winning the league championship. Tommy Burns was special that night!

Great memories that month – April Fools, winning at Ibrox and winning the league at Tannadice!

* For more on Celtic in the 80s we would recommend Caesar & The Assassin from CQN Bookstore, available at a special price HERE or click on the link below.