Celtic Quick News on News Now
You are at:Home»Latest News»ARMSTRONG AT THE DOUBLE AS SCOTS RALLY
By CQN Magazine on 14th June 2022 Latest News

The hosts completed a stormy confrontation with nine players as they lost their discipline as well as the game against a Scots team that overcame a stuttering start to pick up their second victory in the group.

Armstrong played a pivotal role in the opening half with two superb finishes to help turn the tie on its head.

Steve Clarke’s side was stunned in the sixth minute when the hosts took the lead following some lamentable defending from Grant Hanley on the left flank.

Khoren Bayramyan drove forward before slipping the ball across the six-yard line and Vahan Bichakhchyan tucked his effort beyond the helpless Craig Gordon. 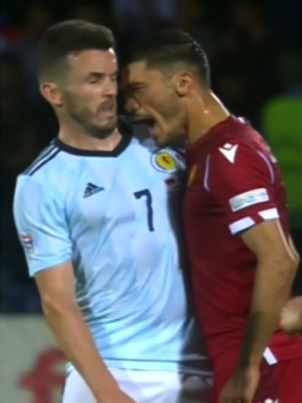 SEEING RED…John McGinn is on the receiving end as Armenia’s Aman Hovhannisyan loses the plot.

The Tartan Army had immediate sinking feelings following the three-goal debacle in Dublin at the weekend, but, thankfully, the visitors gave themselves a shake from their early lethargy to equalise in the 14th minute.

Che Adams mistimed an acrobatic overhead-kick and the ball fell perfectly for the advancing Armstrong and he tucked a sweet low drive past exposed keeper David Yurechenko.

There were still moments of alarm as the back three of Hanley, Jack Hendry and Scott McTominay took time to gel against a lively attack.

Just before the interval there was a moment of madness from defender Aman Hovhannisyan that saw him dismissed after picking up two swift yellow cards.

He was rightly booked for a lunge on Nathan Patterson that sent the Scot flying. As the match official cautioned him, he foolishly got involved with John McGinn and motioned his head forward into the face of the Aston Villa star, who was captaining Scotland in place of the missing Andy Robertson.

That brought the end of the contest for the erring home tough guy.

Moments later, it got worse for Armenia when the Scots took the lead on the stroke of half-time. Callum McGregor and McGinn combined to set up Armstrong and he took a couple of touches before flashing a low right-foot drive into the corner of the net. 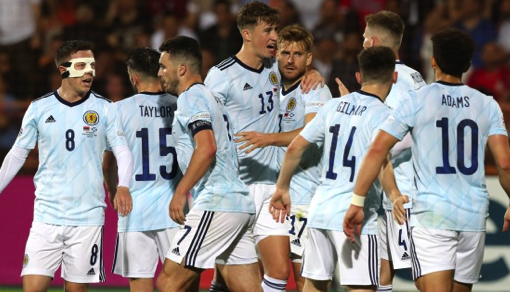 STRIKE TWO…Stuart Armstrong is congratulated after netting his second goal in the 4-1 win in Yerevan.

Within 10 minutes of the restart, Clarke’s men had collected two more goals as they eased towards three points.

Everton’s Patterson set up McGinn shortly after the turnaround and the stand-in captain whipped a drive past the keeper.

And Adams got in on the act after being released by his club and country colleague Armstrong. The Southampton striker carried the ball fully 40 yards before cutting in on to his right and thumping in No.4.

Greg Taylor, in at left-back for Robertson, was busy in the second-half as he broke up attacks and added his weight to the Scots raids on the flank.

Ten minutes later, Jacob Brown came on for the hard-working Adams whose stunning strike was his first in 16 games for club and country.

Shortly afterwards, former Motherwell midfielder Alan Campbell, who had an excellent term at Luton, made his full debut when he came on for Hanley.

The game ended on an explosive note when Kamo Hovhannisyan joined his namesake with a red card following a shocking tackle on Ferguson.

Now McGregor, after playing his 63rd game of an exhausting campaign, Ralston, Taylor and Turnbull can enjoy a well-earned break before they answer the call to Lennoxtown to prepare for another exciting season with Celtic.