And the Hoops legend revealed today’s team remind him so much of Jock Stein’s all-conquering sixties line-up.

Auld, 79, said: “I saw the Invincibles transformed into street fighters at Ibrox at the weekend.

“When they were required to get their sleeves rolled up, that’s exactly what they did. They were right up for the challenge and they were very reminiscent of my old Celtic team and how we could scrap to the last minute to get a win.

“It’s says a lot that they could come back twice from going a goal down – especially when they only had 10 men following Jozo Simunovic’s red card.

“Remember the 1965 Scottish Cup Final when we played Dunfermline?

“Celtic became the first team in history to win the trophy after twice trailing in the Final. Luckily, I managed the two equalisers before Big Billy McNeill headed in the winner and that was the start of something good under Jock Stein.

The former midfield maestro acclaimed the performances of Scott Brown, Olivier Ntcham and Callum McGregor in the turnaround that saw his old club open up a nine-point gap at the top of the league with a game in hand.

Auld said: “Broony was just brilliant, a real leader and an inspiration.

“His through ball to Moussa Dembele for the second goal was perfection itself. Making it even better, he must have known he was about to be clattered by Daniel Candeias who was racing in full-pelt behind him to make a challenge.

“However, the skipper kept his focus on delivering a fantastic pass and was then battered to the ground.

“Referee Willie Collum, quite rightly, booked the offender after playing the advantage rule.

“Moussa took the goal superbly, too. He is beginning to show the qualities we all know he possesses. He looks as though he has got back his self-belief.

“I was hugely impressed by Ntcham, too, particularly in the second-half when it became time for men to stand up and be counted.

“In the first period, he was face-on with Broony. That meant he didn’t know what was happening behind him. After the interval, he changed his shape a little and that gave him the opportunity to start bringing the ball forward.

“McGregor also dug in and flitted around, picking up, passing and keeping the movement ticking over.

“There were some really big performances from the guys in green and white hoops and it was marvellous to see them take the game by the scruff of the neck late on.

“Of course, the manager deserves great praise for the way he sets out his team.

“They played over a third of the match a man short, but you wouldn’t have known it.

“He might have thought about a defensive player going into the last 15 minutes or so. Nine out of 10 other bosses would have taken that route.

“Brendan had already made a swift change following Simunovic’s red card when he replaced Rogic with Jack Hendry around the hour mark.

“I like the look of this laddie. He’s only 22, has just stepped up from Dundee and he quickly caught the tempo of the game.

“He’s got good composure, too, and isn’t satisfied with just heaving the ball into the crowd in tight situations.

“Stuart Armstrong was on the bench and he could have been ideal to stiffen up the middle of the park. He came on with a couple of minutes to go, but he didn’t get the nod earlier.

“However, the Celtic gaffer replaced James Forrest with an attacker in Odsonne Edouard and, of course, his bravery paid off handsomely when the Frenchman got the winner.” 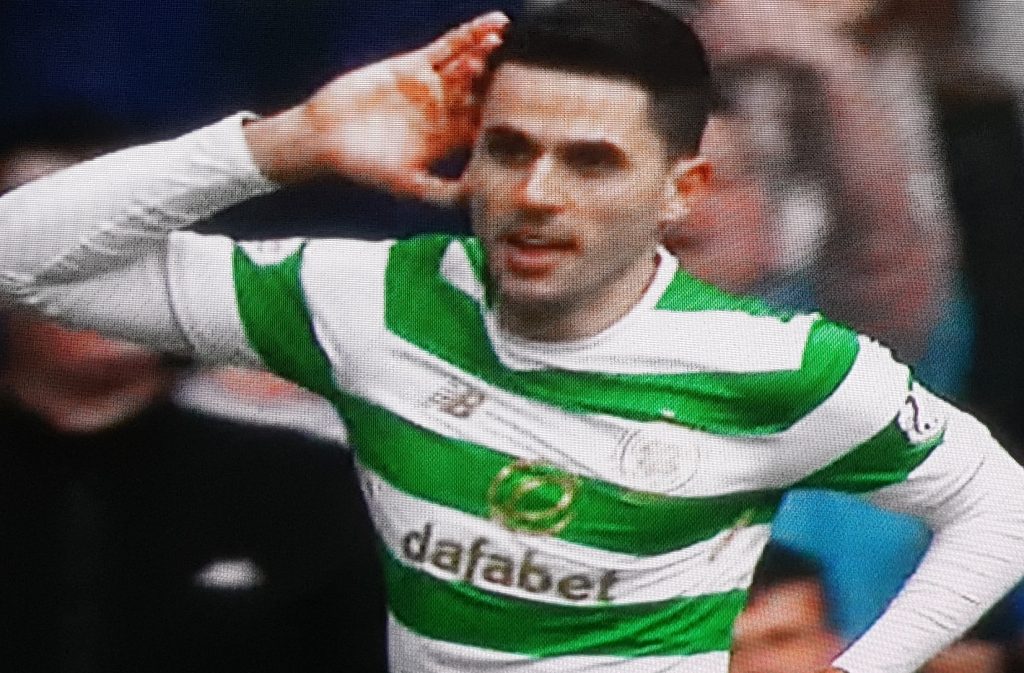 SILENCE IS GOLDEN…Tom Rogic following his excellent equaliser at Ibrox on Sunday.

Auld also paid tribute to Tom Rogic for the way he scored the first equaliser.

He added: “It was absolutely crucial Celtic got back into the game quickly after that shocking early goal for Graeme Murty’s side. What a gift!

“Poor Scott Bain must be in the history books as the only keeper in the club’s history whose first touch of the ball was to retrieve it from the back of the net.

“But he kept calm, too, and his ball out to Kristoffer Ajer was excellent in the 11th minute. That opened the way for Forrest to knock it onto Rogic and it was all about character, belief and skill after that.

“His curling left-foot shot was sublime and, for me, was the most important goal.

“It unsettled the opponents before they had a genuine chance of attempting to dictate play.

“Everything that happened afterwards was built on that.”