MAN-OF-THE-MOMENT Odsonne Edouard has been named the Premiership Player of the Month for August.

Celtic’s record £10million signing from Paris Saint-Germain last summer played his part in the champions’ domestic winning run to the campaign as they eye nine in a row.

Edouard, 21, also got September off to a flying start with the opening goal at Ibrox in Neil Lennon’s side’s 2-0 victory to open up a three-point gap so early in the season. 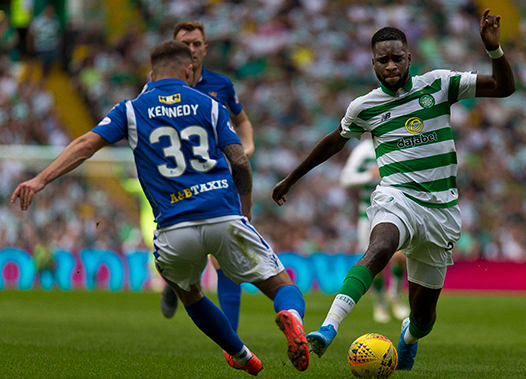 ON COURSE…Odsonne Edouard weaves past St Johnstone’s Matty Kennedy during the
champions’ 7-0 romp on Flag Day.

With six goals, Edouard, who scored four in two games in his introduction to the France Under-21 international side earlier this month, is contuining his excellent form of the previous term when he claimed the double against Hearts in the 2-1 Scottish Cup Final triumph on May 25 to seal the unprecedented treble treble,

The elegant frontman will lead the attack against Rennes in the opening enouncter of the Europa League group in Brittany on Thursday evening.

It’s the second time the players has won the award after collecting the prize in April.

Edouard has scored 40 goals since initially joining Celtic on loan from the Paris giants in August 2017.