Celtic Quick News on News Now
You are at:Home»Latest News»AXED AFTER 27 DAYS: THE STRANGE CASE OF CELTIC STRIKER
By CQN Magazine on 16th April 2021 Latest News

SOME Celtic fans are unhappy that Patryk Klimala is leaving the club after only 15 months.

The Polish striker scored a meagre three goals in 28 appearances and a section of the Hoops support believe he was not given enough game time to justify the £3.5million fee that was paid to Jagiellonia Bialystok in January 2020.

Followers insisted the 22-year-old forward did not deserve to be labelled a flop, despite his lack of goals which prompted the Glasgow club to move him on to MLS outfit New York Red Bulls in the hope of recouping most of their initial transfer outlay, as CQN reported yesterday.

The fallen champions will be looking to revitalise their striking department which could also see Odsonne Edouard and Leigh Griffiths quit the club in the summer while Albian Ajeti, a £5million arrival from West Ham, has failed to convince with only seven goals.

If some fans thought Klimala didn’t get the opportunity to shine, then spare a thought for the Celtic striker who was heading for the exit – after only 27 DAYS. 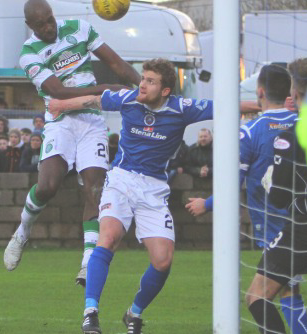 That distinction fell to one-time England international forward Carlton Cole who was given the boot by Brendan Rodgers who made the quickfire decision to hand the player his P45.

The 33-year-old misfiring marksman scored only one goal in five appearances after Ronny Deila had signed him following his release in October 2015 from West Ham where he had spent nine years. His solitary strike came in a 3-0 Scottish Cup win over Stranraer at Stair Park in January 2016.

Rodgers had only been in the job 27 days when the seven times-capped forward was released eight months into his original two-year deal.

After getting the elbow from the Irishman, Cole had a brief and goalless stint in the States with Sacramento Republic where he played only four games before returning to the UK.

That was followed by a disastrous spell in Indonesia with Persib Bandung where he failed to score in five appearances and had his contract terminated.

Cole, who played for eight different clubs after starting his career at Chelsea in 2001, had a trial with AFC Wimbledon in January 2018 before announcing his retirement three months later.