Celtic Quick News on News Now
You are at:Home»Latest News»BACK TO THE FUTURE FOR GREG
By CQN Magazine on 30th January 2020 Latest News

GREG TAYLOR put down a marker for the left-back slot at Celtic with an impressive performance in the 3-0 victory over St Johnstone in Perth last night.

The Scotland international defender made only his sixth first-team start since his £2.25million switch from Kilmarnock on the summer transfer deadline day.

Taylor has struggled for game-time while Neil Lennon has mainly utilised Boli Bolingoli, bought from Vienna Rapid for £3million in July, and versatile Republic of Ireland ace Jonny Hayes.

But the 22-year-old full-back has impressed the Hoops gaffer with his application and dedication at Lennoxtown which swung him a starting berth at McDiarmid Park.

Lennon, speaking to the Daily Record, said: “That was his best performance for me. He can be delighted with it.

“We were working on him a little bit yesterday and he put three or four superb crosses in, which I hadn’t seen before.

“We worked with him on that. He’s a willing learner and I thought his all-round game was very good.

“There were some outstanding individual performances, but I couldn’t speak highly enough about the team as a whole.” 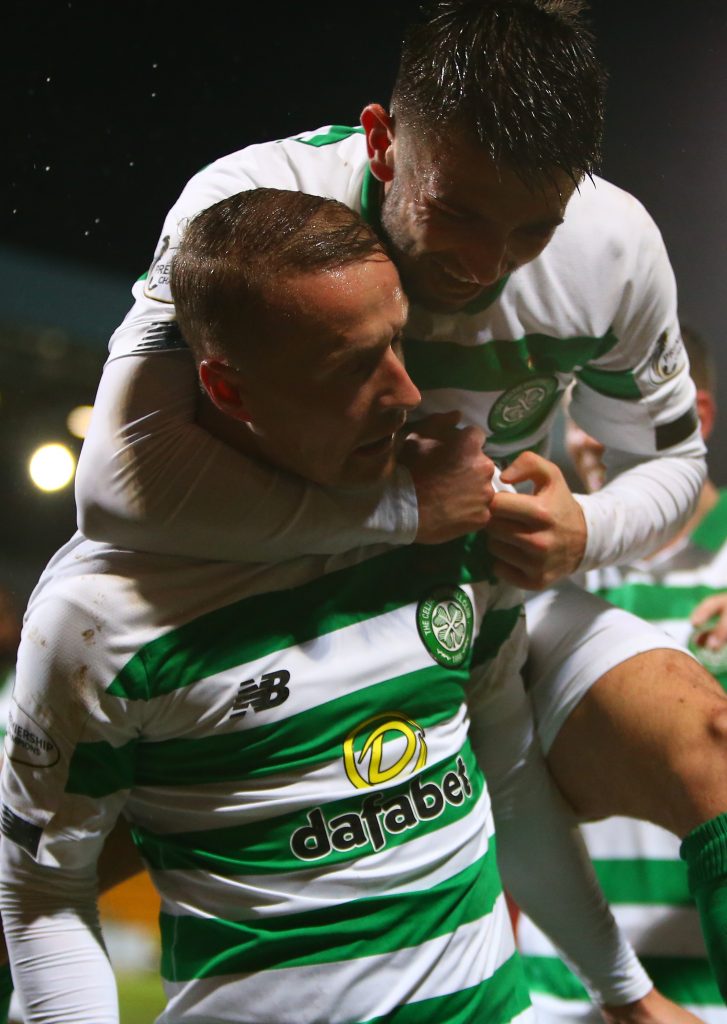 THREE CHEERS…Greg Taylor celebrates Leigh Griffiths’ strike that made it 3-0.

Taylor fired in a few inviting crosses for the frontmen against Saints and it was his inch-perfect lofted pass that allowed Leigh Griffiths to volley in the third goal in the first-half onslaught on Zander Clark who has already been beaten by efforts from Olivier Ntcham and James Forrest.

Lennon added: “I was a happy man overall, but the first-half was absolutely outstanding.

“The fluidity of the team, the chances we created and the attitude – the overall quality of football and the pace we played at was breathtaking.

“When you are 3-0 up at half-time you always want more goals. But we had to change the shape because Jozo Simunovic had a knee problem.”

Austrian international right-back Moritz Bauer, whose loan deal from Stoke City only has another four months to run, came on after the interval for the Croatian centre-back.

The Hoops took their foot off the gas, but Lennon was still delighted to be top of the table five points clear of Steven Gerrard’s side who beat Ross County 2-0 at Ibrox.