The champions were sloppy in the opening stages and were rocked when Liam Donnelly rifled a low 16-yarder past Scott Bain in the 12th minute to set up a possible shock result, as CQN stated in the match report.

Thankfully, Norwegian Kristoffer Ajer, who vied with Olivier Ntcham for the CQN Man of the Match award, had an instant reply as he thundered from his own half into the Well penalty box to slip the equaliser beyond Mark Gillespie exactly one minute and 47 seconds later.

That enterprising piece of play from the makeshift right-back, performing in the No.2 position in place of the injured Hatem Abd Elhamed, opened the floodgates and Leigh Griffiths, James Forrest, Odsonne Edouard and Ryan Christie, with a perfect penalty-kick, piled the misery on Stephen Robinson’s side.

Worryingly, though, the defence switched off again in stoppage time and presented Donnelly with a second goal when a rearguard that consisisted of skyscraper defenders such as Christopher Jullien, Nir Bitton and Ajer failed to deal with a routine right-wing corner-kick. 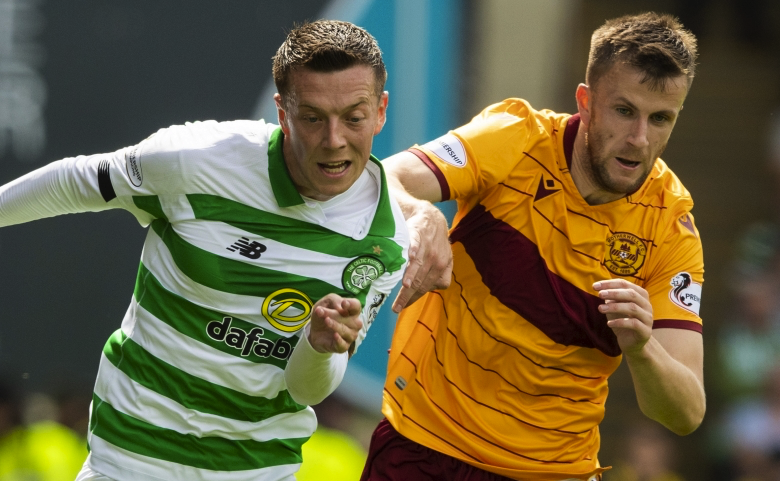 THE RACE IS ON…Callum McGregor puts on the pressure.

The £7million Frenchman, a towering 6ft 5in, was far too easily beaten by Declan Gallagher who nodded the ball back into the danger zone and the visiting defenders were slow to react.

Overall, Lennon was satisfied with his players’ response to going a goal down, as they have already done twice this season in Bosnia and Romania.

The Celtic gaffer, speaking to BBC Sport, said: “I’m delighted it was an outstanding team performance with some outstanding individual performances, as well.

“The only criticism I would have would be the way we approached the game early on, a few bad habits creeping in and inviting pressure.

“But once we solved that we were outstanding and to score five with five different goalscorers – it was a powerful performance, magnificent.

“We are coming on nicely, it’s a balancing act at the minute. We don’t want to change the back four too much, but there were two enforced changes. We have had little time between Cluj and today to work on things, but I’m delighted with where we are – 12 goals in two games and you can’t ask for much more than that.

“You can tell there’s a few of them still undercooked, we are hoping to add to the squad as we go along.

“We are not the finished article by any means, but I’m delighted with where we are.”