Celtic Quick News on News Now
You are at:Home»Football Matters»BANNAN HAILS ‘BIG-GAME’ BROWN
By CQN Magazine on 10th November 2016 Football Matters
BARRY BANNAN has welcomed back Scott Brown as Scotland prepare for tomorrow night’s World Cup qualifier against England at Wembley.
The pint-sized Sheffield Wednesday midfielder believes the presence of the Celtic skipper will go a long way to the Scots reviving their ailing Russia 2018 campaign. 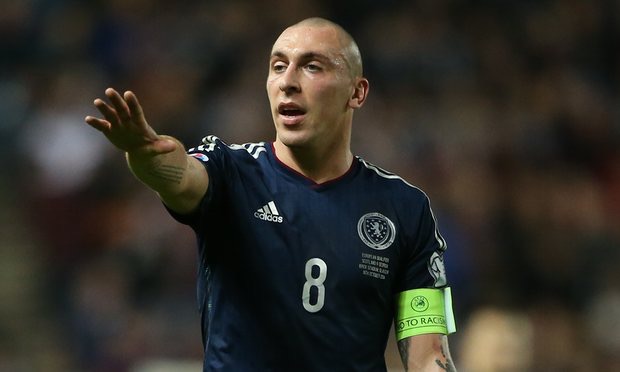 Gordon Strachan’s side have picked up just one point from their last two matches, following a 1-1 draw with Lithuania at Hampden and a lamentable 3-0 collapse in Slovakia.
But Bannan is relishing the possibility of playing alongside the comeback Bhoy in such an important occasion for the country.
He said: “Scott Brown is a massive player – he’s been brilliant for this country and he’s been brilliant for Celtic in major Champions League matches.
“He is a big-game player and he is a huge boost for the squad. You need experience going into games like this and he’s got a lot of it, so it will be a great lift for us.”
Bannan added: “Obviously, we’re disappointed with the last two results and we want to do a bit better.
“This is a massive game against our rivals, so it’s one of the best games to go and show what we actually can do.

“It would be wonderful to get a good result there. It would push us up in the group, as well. It’s one that I’m looking forward to and can’t wait for it.

“This is one of the biggest arenas in world football, against one of your biggest rivals. Growing up as a kid, first and foremost, you want to play for your country – that’s one of your aims.

“But to play against England? It doesn’t come much bigger.”