VASILIS BARKAS, the most expensive keeper in Celtic’s history, is poised to make his comeback in the Betfred League Cup encounter with Ross County at Parkhead this afternoon.

The axe will fall on Scott Bain after a disastrous run of seven games where he has conceded 16 goals, including four in a hesitant performance in the loss to Sparta Prague on Thursday as the Hoops toppled out of Europe with two ties still to play.

Barkas, who cost a record £4.5million when he arrived from AEK Athens in the summer, was dropped after losing three in the defeat against AC Milan in the opening Europa League Group H encounter in Glasgow last month following a poor display in the 2-0 flop against Steven Gerrard’s Ibrox outfit.

Neil Lennon has been undecided about his first-choice netminder, as CQN highlighted earlier this month.

The Hoops gaffer admitted it has not been easy for Barkas and the other new Bhoys to integrate with the rest of the squad since coming in during the coronavirus pandemic.

Lennon, speaking to the Scottish Sun on Sunday, said: “I see this game as a chance to maybe make a few changes, but not too many. All positions will be considered.

“It’s been difficult for Barkas, as it has been for all the new players. He’s come from a different country and different climate into a different environment. 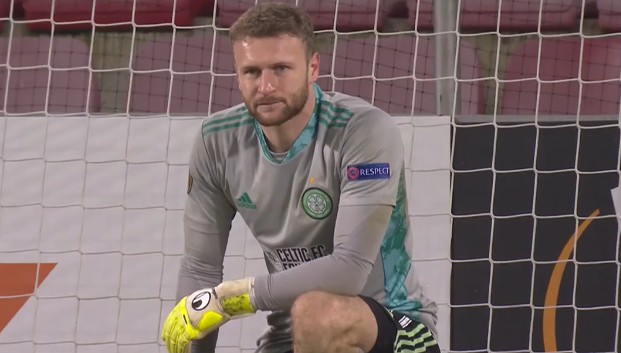 OVER AND OUT…Scott Bain looks dejected as Sparta Prague net four on Thursday.

“He did okay, but he can do better and I think he knows that. He’s getting more accustomed to the tempo of the game, the physicality and what’s required of him.

“Whether I bring him in or not is irrelevant. I want to see an improvement in his body language and his functionality as a keeper.”

Lennon plans to build a new lounge at the club’s Lennoxtown training HQ in an effort to help players get to know each other better during the current lockdown.

“So, it’s been difficult to get him involved and for them to really get to know each other because the way the world is split up.

“The only time you’re all together is for training, then you go home to an empty house.

“Having spoken to Scott Brown about it, he definitely feels being unable to build camaraderie like we normally can is a factor.”