VASILIS BARKAS is at the centre of a new Celtic mystery as Ange Postecoglou named the keeper in his squad for the Premiership encounter against Hearts at Tynecastle tonight.

The £4.5million misfit was on the brink of signing for Sheffield United earlier this week before the proposed switch fell through.

The Championship outfit, relegated from the Premier League last season, reportedly pulled the plug because they could not agree finances with the Hoops for the former Greek international No.1 who became the most expensive netminder in the Parkhead club’s history when he arrived from AEK Athens in the summer of 2020. 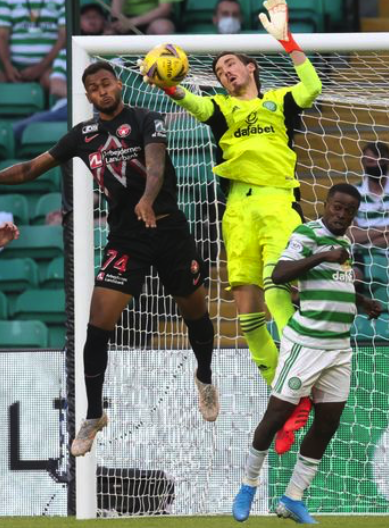 UP IN THE AIR…Vasilis Barkas claims a high ball in the 1-1 draw with FC Midtjylland in the Champions League qualifier at Parkhead in July. The Greek keeper didn’t feature again until the 3-1 win over St Johnstone on Boxing Day.

The Bramall Lane outfit baulked at having to pay a huge percentage of Barkas’ alleged £20,000-per-week wages while Celtic were seeking a £2.5million transfer option inserted into the temporary contract. It is also thought the Glasgow giants wanted a percentage of any sell-on fee.

It is clear the flop shotstopper, under contract until June 2024, has no future at the club, but Postecoglou has included him in his pool for the crucial match in the capital, according to the Daily Record.

The clock is ticking on the club’s chances of moving on the 27-year-old goalkeeper and they have until midnight on Monday to loan or arrange a permanent deal for the player who has made only two first-team games this term.

Joe Hart and Scott Bain, who recently agreed a two-year extension, are also in the squad which includes Christopher Jullien who has been out since December 30 2020 following a collision with a goalpost in a 3-0 win over Dundee United at Parkhead.

Postecoglou, of course, is without Tom Rogic and Daizen Maeda who are on World Cup duty with Australia and Japan while skipper Callum McGregor, Kyogo Furuhashi, Yosuke Ideguchi, David Turnbull and Albian Ajeti are ruled out with a variety of injuries.

Matt O’Riley, the recent £1.5million recruit from MK Dons, is standing by to make his debut against Robbie Neilson’s men and he could team up in a new-look midfield alongside Reo Hatate who won the Man of the Match accolade in his first appearance in the Hoops’ 2-0 win over Hibs last week.