REAL BETIS star defender Marc Bartra is likely to be OUT of the Europa League Group B opener against Celtic in Seville on Thursday night.

The former Barcelona centre-back limped off after only 13 minutes of his side’s 2-1 La Liga win over Granada last night.

German Pezzella took over his place in the rearguard as Rodri Sanchez gave the side a first-half advantage, but that was wiped in the 66th minute when Luis Suarez levelled. However, in the fading moments Sergioe Canales netted the winner after a spectacular solo run. 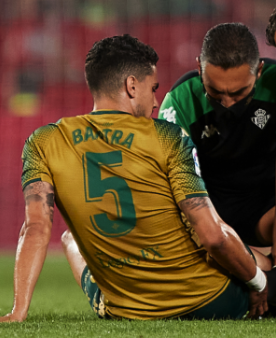 GROUNDED…Real Betis defender Marc Bartra sits it out after his early injury against Granada.

The Bartra setback, though, is a real headache for former Manchester City and West Ham gaffer Manuel Pellegrini just three days before the crucial kick-off to the section that also consists of Bayer Leverkusen and Ferencvaros.

Bartra has an extensive recent injury record with various issues preventing him from fulfilling the potential he displayed early in his Barca career, according to a report in the Daily Record.

A heel problem kept him out of the Betis team for three months last season, but Pellegrini still sees the uncompromising defender as vital to his team’s structure.