NEW Bhoy Moritz Bauer has warned Celtic rivals to prepare for an aerial bombardment for the rest of the season.

The Austrian international right-back, who is on loan from Stoke City until the end of the campaign, believes his mighty throw-ins can be a letal weapon for the champions.

Hoops fans were startled when they witnessed the defender hoisting over a massive shy during his substitute’s appearance at Ibrox in the 2-0 win before the international break.

His awesome heave even took intended target Odsonne Edouard by surprise as it flew over the Frenchman’s head.

Bauer revealed he has spoken to ex-Potters defender Rory Delap – a former schoolboy javelin champion – who was famous for possessing record-breaking throw-ins. 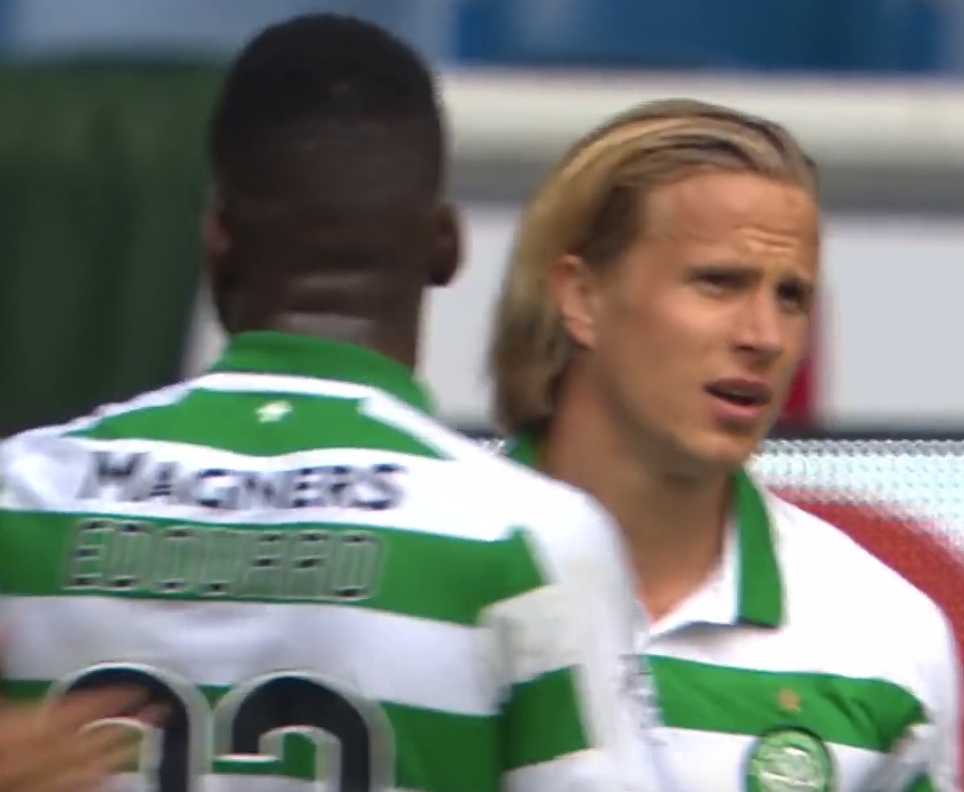 HAPPY DAZE…Moritz Bauer celebrates with Odsonne Edouard after the 2-0 win at Ibrox.

The 27-year-old defender, speaking to the Daily Record, said: “When I was converted to a right-back as a youngster at Winterthur, my Under-18 coach told me the throw-in can be a weapon.

“The coaches said that as important as dribbling and crossing were to wingers, the throw-in was vital to the full-backs because almost every ball that goes out is for the full-back.

“And, of course, at Stoke we had the world famous Rory. I spoke to him, but even he said it’s a difficult skill to teach, it’s more about technique and timing.

“It’s a bit like golf where it’s more about the technique than the power. We added it to my game because as a right-back you have many throw-ins as you’re often on the line. And when you are under pressure you can throw the ball – it’s maybe the strong Scottish wind that made it fly so far at Ibrox!

“We had competitions for fun at my old clubs to see who could throw the longest distance.

“It’s good because if you are 1-0 down at the end of a game then you can get the defenders into the box and create some chaos. It’s a good asset to have.

“But while we kicked off against Rangers by kicking the ball deep into their half, we won’t do that all the time and will try to keep the ball on the floor.

“On certain occasions you can use that tactic to surprise the opposition. At some of my former clubs even the defenders came up. 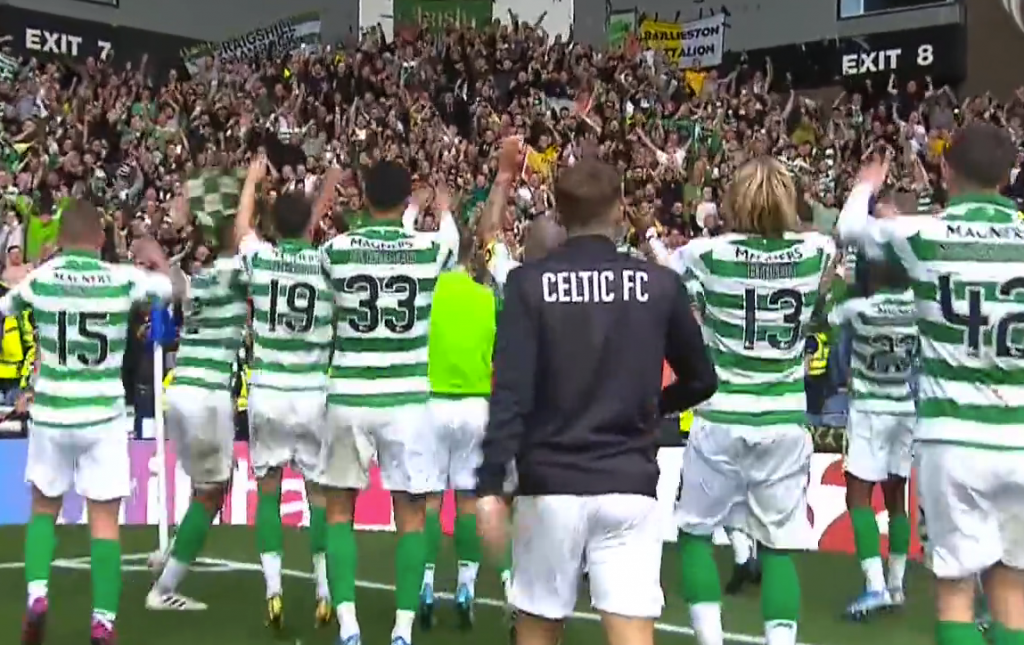 FAN-TASTIC…Moritz Bauer (No.13) joins in with his new team-mates as they share the joy with the supporters at Ibrox.

“And here at Celtic we have Nir Bitton, Kris Ajer and Christopher Jullien, so we have some really good height and can bring them up. Even if they don’t put it straight in they can get a flick.

“I haven’t spoken to the manager about it because when I arrived we had two massive games against AIK and Rangers.

“We had more important things to do than watch videos of my throw-ins and football is played with the feet, so I was judged on my skills with the ball on the floor.

“But during the international break, we had time to catch up and spoke about the fact I can bring a long throw to the table.”

Bauer reflected on his half-an-hour of action in Govan when he replaced the injured Bitton and continued: “It couldn’t have been any better!

“The atmosphere, the team’s performance and obviously, the result. Fortunately all of my debuts have been in some big matches.

“With Stoke it was against Manchester United at Old  Trafford and with Austria it was against Georgia, when we drew 1-1 in spite of being under pressure.

“Your first game is always intense, but this was an iconic fixture to start with – winning at Ibrox was really great.

“We weren’t expected to win but at Ibrox, while not everyone thought we would win, that was also a special atmosphere.

“It was the first derby for many of our players and we put on a great display. I was proud of everyone.

“I was warming up a lot because, even early in the game, there were a lot of tackles and duels which could have gone either way, so I had to be ready. You could feel the passion of the crowd, even though they weren’t very supportive towards me! That’s part of the game though and it was a good introduction.

“I’ve had many people coming up and congratulating me on the derby victory, telling me how much the win means to the fans.” 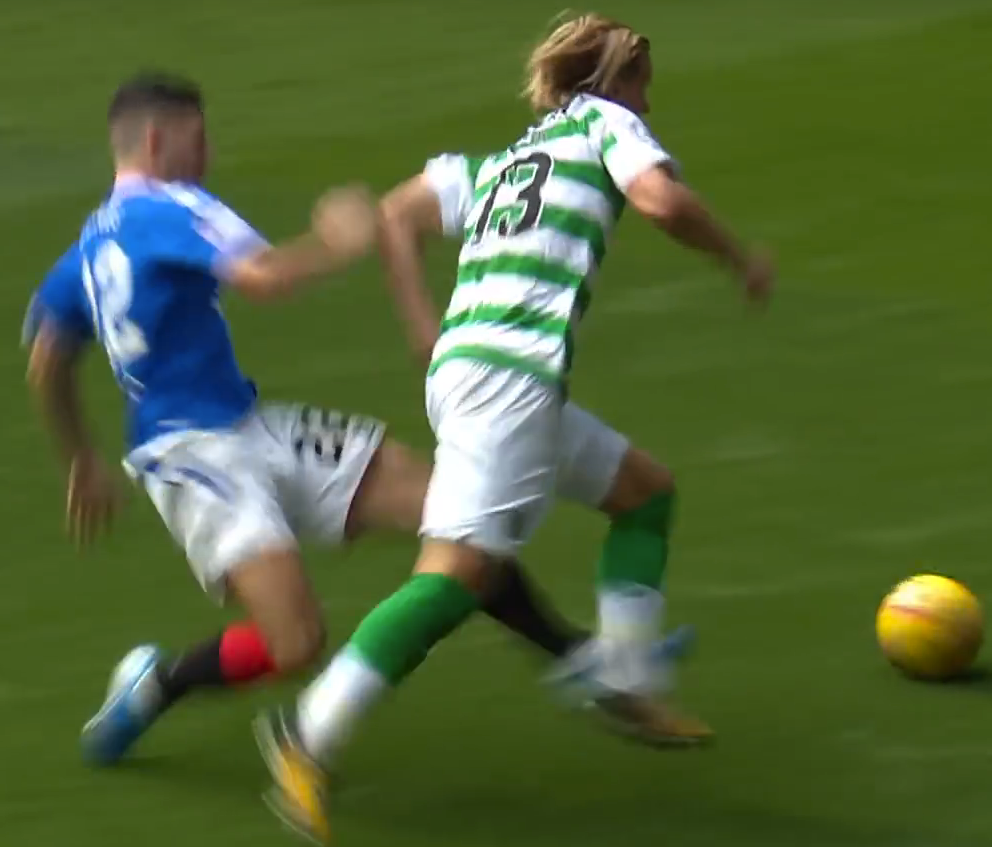 The cultured defender was scythed down in the fading moments and he added: “I didn’t see him after the game, but he called the next day and we had a good chat. That was fine with me and it came as a pleasant surprise. It is a compliment to him and fair play.

“I was lucky I wasn’t injured by his challenge – I knew at the time it was a badly-timed tackle, but I don’t believe it was anything personal, even though it looked really bad on TV and social media.

“Unfortunately, he hurt himself a little bit.

“I got away unscathed and he came off worse but there are no hard feelings from me.

“I’m sorry for him because, whoever you play for, no-one wants to see an opponent injured.

“It showed character on Jordan’s behalf that he took the trouble to call me and say he was sorry.”