FROZEN-OUT Celt Vakoun Issouf Bayo looks to be heading back to Parkhead after his season-long loan at Toulouse.

The Ivorian striker, who cost £2million when he arrived in January 2019 as one of Brendan Rodgers’ last buys for the club, appears to be out of the price range of the French second tier club.

Bayo scored 13 goals for the team who just missed out on promotion to Ligue 1 at the play-off stage.

That will almost certainly scupper a permanent move for the 24-year-old frontman, as CQN warned last week.

Toulouse chief Damien Comoli, quoted in a report in Glasgow Live, admitted: “As far as Bayo is concerned, we have an option on him that is still applicable for several weeks. 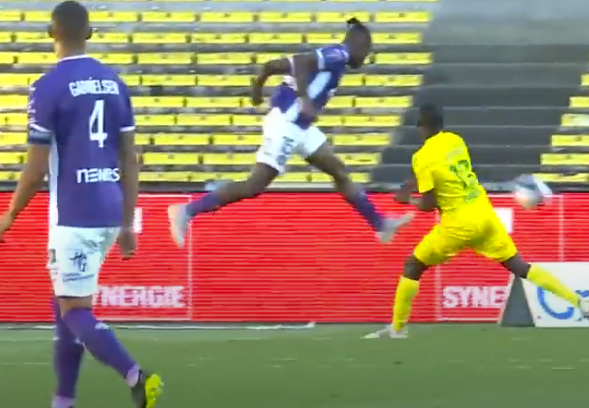 RISE AND SHINE…Vakoun Issouf Bayo scores with a header against Nantes, one of his 13 goals for Toulouse.

“But, in all honesty, the question is mainly financial.

“He is a player who has a very high salary and now has many options, too.”

Sochaux and Tunisian champions Esperance have been linked with Bayo, who is nicknamed ‘The Crow’ for his aerial ability.

He is due to restart training at Lennoxtown in two weeks’ time.

Bayo has struggled to make an impact at Celtic and has yet to score in the Premiership. His two goals in 16 appearances have come in knock-out competitons against lower league sides, Clyde in the Scottish Cup and Partick Thistle in the Betfred League Cup.