Celtic Quick News on News Now
You are at:Home»Football Matters»BBC SCOTLAND SNUB FOR LEAGUE CUP HOLDERS
By CQN Magazine on 1st September 2015 Football Matters
HOLDERS Celtic have confirmed their home League Cup-tie against Raith Rovers will be played on Wednesday, September 23.
Ronny Deila’s men are due to play Ajax in their opening Europa League game in Amsterdam on Thursday, September 17, which will push their SPFL encounter against Dundee at Parkhead onto Sunday. 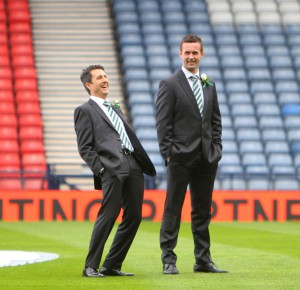 The option of the Third Round match taking place on the following Tuesday was scrapped.
Celtic lifted the trophy last season after beating Dundee United 2-0 in the final with goals from Kris Commons and James Forrest. This came after what turned out to be a stroll in the park against lower league opposition on  February 1, where first half goals by Leigh Griffiths and Kris Commons were enough to see off the Championship side, in the first ever match between Celtic and the club formed in 2012.
This season kick off the defence of their silverware against the Fifers, who have reached this stage after beating Albion Rovers 3-0 and Premiership side Hamilton 2-1.
The Celtic v Raith Rovers match will not be televised live as BBC Scotland had the right to select a match for live transmission and once again opted for Ibrox.
The BBC has chosen to broadcast live from Ibrox in this competition almost continually since the new club was formed in 2012. Supporters of clubs like Aberdeen, Dundee United or Hearts really must be thinking that the only way they’ll get the nod from Pacific Quay is to draw the latest Ibrox club in this competition.
At this stage we are unsure if it is Sportscene or Crimewatch that the BBC will be filming. Rangers (sic) seems to be the only club in Scotland that doesn’t need to pay before the Police show up.
————————————————————————–
*We have a limited number of SIGNED copies of Caesar & The Assassin remaining and these are available at a discounted price. You can order direct from CQN by clicking HERE or by clicking on the photograph below…