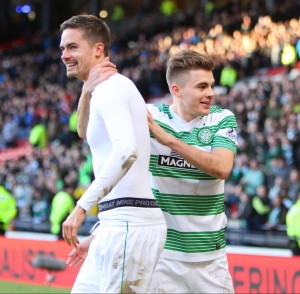 The Swedish international defender has thrived on the massive occasions since arriving at Parkhead five years ago and he reckons taking part in a Glasgow derby at Hampden will be memorable.
Lustig said: “It’s a big game and we want to win that trophy,” adding about the new club; “they have a new team and we’ve got a couple of new guys as well, so it’s a different game from last year’s League Cup semi-final.”
First-half goals from Leigh Griffiths and Kris Commons settled the encounter in February last year in a totally lop-sided affair where the opponents didn’t even manage to get a solitary effort on target.
The right-back recalled: “We got the two goals quite quick and after that we controlled the game. Goals always change games, especially in a semi-final, but when you get the lead you maybe want to play different football.
“We did well for 90 minutes and, in the end, it maybe felt quite EASY, but it could be different this time. The last time, we still wanted to score goals, but it was a semi-final and we wanted to get to the final. You need to be smart as well and not just chase goals. 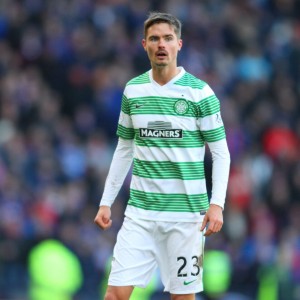 “There was a lot of media and things to do before the game, but we handled it well and we’ll hopefully do the same this time.

“We know we have more. We can play better football and we have learned we can still win games when we’re not good. Right now, we haven’t reached the top of our game, but we’re going to get there.”

Lustig also has an eye on the Hoops’ progress towards the club’s fifth successive title and added: “We’re eight points clear and the next one is Ross County, so, hopefully, we get another three points against them.

“Aberdeen are the closest team, but as long as we win the title it doesn’t matter if it’s against Hearts, Aberdeen or Motherwell.”
———————————————————
ORDER your signed copy of CQN’s new book, CHARLIE GALLAGHER? WHAT A PLAYER! by Celtic historian David Potter, which is out early May.
Click HERE to order or use the image below.