CHRIS SUTTON has claimed it would be “sheer stupidity”  from referee John Beaton if the photographs of him drinking in a “Rangers-friendly” pub after Celtic’s 1-0 loss at Ibrox were authentic.

The former Hoops striker, now a media pundit, insisted the match official, alleging he had been the victim of on-line threats, “hasn’t helped himself” if images are genuine.

Sutton had to contact police this week after threats were made following his comments on the whistler’s handling of the game where he overlooked three flashpoint incidents involved Alfredo Morelos with opposition players Scott Brown, Ryan Christie and Anthony Ralston.

He was also critical of the SFA when the controversial Colombian, who has seen red three times already this season, escaped further action.

Sutton, speaking about photos that have been circulated on social media in recent days, claimed it would be considered “sheer stupidity” if Beaton has needlessly opened himself up to more abuse by drinking at the home hostelry of the Crown Bar Loyal Rangers Supporters Club, in Bellshill, only hours after the match. 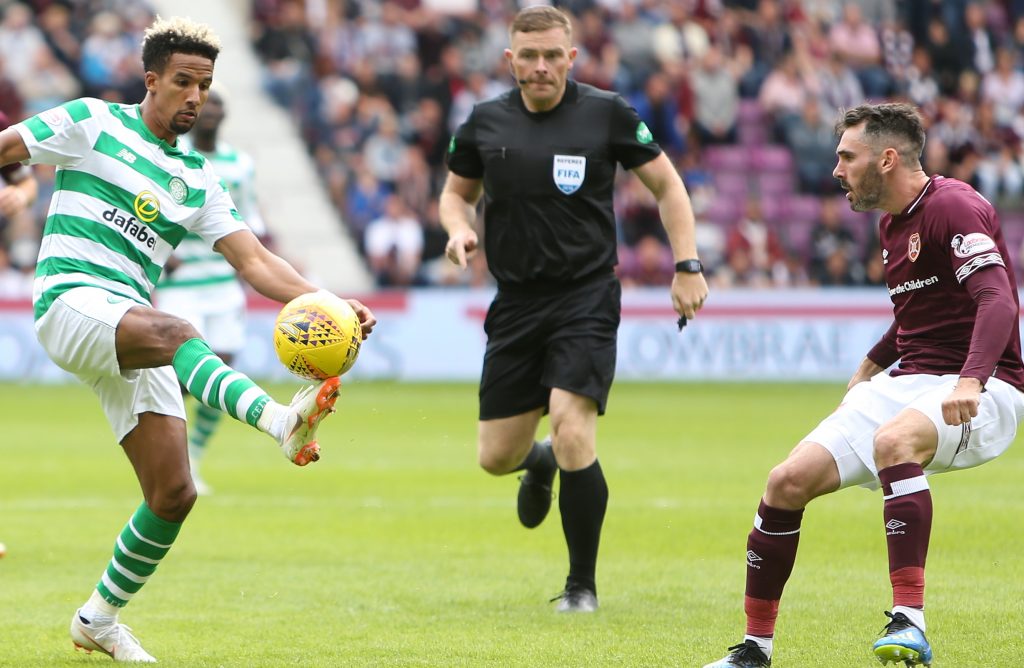 MAN IN THE MIDDLE…referee John Beaton gets a close-up view of Scott Sinclair’s skills against Hearts in August. Celtic lost 1-0. Pic: Geo.

He said: “I don’t know whether that is a valid photo. But if he was photographed on the day in the pub that is just sheer stupidity.

“If he was photographed in the Rangers pub then you can understand Celtic fans feeling the way some of them do. I don’t think it is sensible if you are refereeing in an Old Firm game to then go into a Celtic pub or a Rangers pub because it shows an allegiance.

“The threats are ridiculous, but he hasn’t helped himself there.”

Sutton added: “In the game in real time you can make mistakes, but it is what has happened afterwards which has turned into a sham. You cannot kick someone in the nuts, you can’t grab someone’s nuts and you can’t trample over somebody.

“It is not right and it is fair enough for the SFA to be called out. When there are big issues over violent conduct they have to set the precedent and they haven’t done that.”

Celtic have called for a clarification of the rules in a meeting with the Scottish football rulers this month.