The Croatian Under-21 international centre-back has been in impressive form since joining the champions on loan in August.

However, there was the danger of the deal being cut shot during the January transfer window if the Midlands outfit sold England defender Harry Maguire.

Puel paid £13million to Dinamo Zagreb for Filipovic when it looked as though his sought-after centre-back was about to join Manchester United. The move did not materialise and Brendan Rodgers made a hasty move for the classy 21-year-old back-four operator in the midst of the Dedryck Boyata controversy.

City’s French boss said: “If there are no problems with injuries, I would like my players on loan to continue  progressing and developing and to find their confidence and consistency. 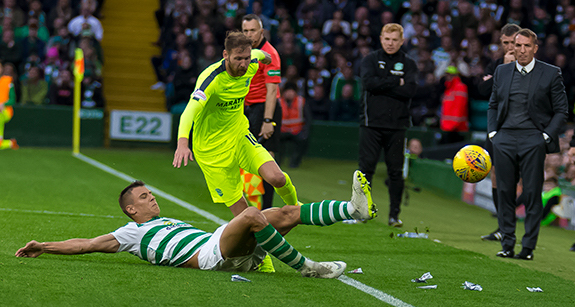 THOU SHALT NOT PASS…Filip Benkovic, under the watchful eye of Brendan Rodgers, nicks the ball away from Hibs attacker Martin Boyle.

“For me, it’s the right way for them and for us. I want players who are ready to play next season.

“It’s a great chance for Benkovic to play and come back with strength and good quality for us.

“He signed with Leicester  to play in the Premier League, but this is a fantastic opportunity for him.

“If, for example, we have five or six centre-backs we know it’s not possible to manage all of them.

“I prefer it if we can continue to improve with these players and give them some game time. It will be a strong benefit for us – and for them.

“In the last transfer window, we made moves to improve the team and prepare the team for the future.

“Benkovic was a player we identified as ready to play for us. I will be happier when he comes back to us  after the normal time with Celtic.

“Then we will have a player who is ready to play for us next season. I think that’s important and it’s a good way to do it.

“If some players have to come back early in January, it will only be because we have some injury problems or other such things.”

Benkovic has been such an immediate hit with the Celtic fans there have been calls for the club to attempt to make his move permanent.

The classy defender has settled in well alongside Boyata in the heart of the rearguard and they appear to be Rodgers’ favoured partnership at the moment.

And the on-loan ace showed he could be deadly in the opposing penalty box, too, when he scored his first goal for the club in the 5-0 destruction of Hearts at Parkhead at the start of this month.

* DON’T miss the unbeatable match report and the best in action images from Hamilton Accies v Celtic this afternoon – in your champion CQN.