FILIP BENKOVIC has revealed he shouldn’t have been on the Ibrox pitch during Celtic’s disappointing 1-0 loss before the turn of the year.

The Croatian Under-21 international defender didn’t even last the first-half before limping off to be replaced by Kristoffer Ajer.

Benkovic, on loan from Leicester City, had felt twinges in his knee in the previous game, the 4-3 win over Aberdeen at Pittodrie.

However, the classy centre-back decided it was worth taking a risk against Steven Gerrard’s men as he was desperate to sample the atmosphere in the fixture.

However, it was obvious he was toiling early in the encounter and Brendan Rodgers was forced to make the enforced substitution which disrupted his team plans for the day which weren’t helped when he had to put on Anthony Ralston for Mikael Lustig at the start of the second-half.

Benkovic, though, stressed he is now back to 100 per cent and the winter break in Dubai arrived at the perfect moment.

He said: “My knee is good again. I had the problem for a few weeks in December. but it’s okay now.

“I’ve trained as normal in Dubai, doing my rehabilitation and some extra work on my knee. 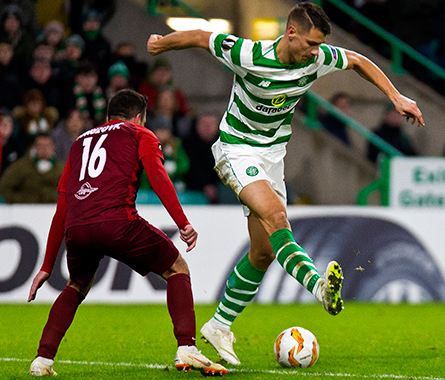 FOR MY NEXT TRICK…Filip Benkovic bamboozles a Salzburg defender.

“I still feel it a little bit, but I can do everything on the pitch. If it stays like this, everything will be fine.

“During the Rangers match, I felt the same pain in the 10th minute I had felt at Aberdeen. I knew then that it was impossible to continue, so I told the coach and we made the decision to come off.

“Before the game I’d taken some medicine, a lot of stuff, but it didn’t help. We had a few injuries already in defence and sometimes you get days like that. It was tough, you know. But I tried. I just wasn’t going to make it.

“In hindsight, maybe I shouldn’t have played. However, when you’re a footballer you want to play in every game – especially that one!

“You play football for games like that. Those matches are different, so you want to give everything – even if it’s on one leg!

“So, I tried, but it didn’t work. Now, I’m not thinking about the Rangers game any more.

“We didn’t play well, so we’ll move forward to the next game. That defeat is in the past and our focus is to be much better.”