Celtic Quick News on News Now
You are at:Home»Latest News»BERO, BITTON & EMPTY RUMOURS
By CQN Magazine on 18th November 2015 Latest News
CELTIC have apparently been keeping tabs on highly-rated Slovakian youngster Matus Bero.
It is believed the Hoops have already scouted the 20-year-old midfielder who played for his Under-21 international team in their 4-2 European Championship home win over their Dutch counterparts last night.
Bero was taken off at half-time. Local sources also claim the Hoops watched the wonderkid, who plays for local club AS Trencin, in action in a league game against Spartak Myjava recently.
He has been attracting interest from across Europe, with clubs including Arsenal, AC Milan and Anderlecht also watching his progress.
Bero recently signed a three-year contract with Trencin, but his club are unlikely to stand in his way if they receive a cash bid during the January transfer window.
The playmaker has already netted nine goals in 15 games this season…but it has to be said that Celtic scout literally hundreds of players.
Meanwhile Sunderland are supposedly interested in Celtic’s stylish midfielder Nir Bitton, who recently signed a new long term contract with Celtic which will keep him in Paradise for another five years.
Despite this press speculation, Bitton will be going nowhere anytime soon.
Yesterday we mentioned that the Black Cats are set to off load Adam Matthews who they signed from the Scottish Champions for a fee of £2m.
Thanks to everyone who has ordered a copy of CQN’s new book THE WINDS OF CHANGE. The books will be posted out from Thursday and you can order at the new look CQN Bookstore HERE – we reckon that this is our best book yet and your continued support is greatly appreciated. 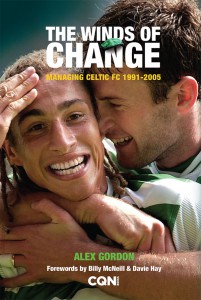 If you enjoyed Caesar & Assassin then you will not want to miss THE WINDS OF CHANGE. We pick up the story in the summer of 1991 when Billy McNeill has just lost his job as Celtic manager. Liam Brady replaced Billy and our story begins running through in total 8 managers up to and including Martin O’Neill who left after the 2005 Scottish Cup Final.

This is probably the most dramatic period in Celtic’s history and given the desperate state we were in as a club in the early nineties and also the decade of cheating we had to endure – although we never knew if at the time – our recovery and our glory is all the more remarkable.

Fergus McCann features prominently, as you would expect, in THE WINDS OF CHANGE and what comes across is that the wee man was never in it to win a popularity contest. He made tough calls – some right and some wrong – but he always had his purpose set out very clearly.

You can order  THE WINDS OF CHANGE here.