CELTIC book author Alex Gordon will be among the mourners who will say a final farewell to Celtic legend Bertie Auld today.

The co-author of the football great’s autobiography, ‘A Bhoy Called Bertie’, admits he is “privileged and honoured” to have spent time with the much-adored Celt.

DEATH takes from us the irreplaceable.

Bertie Auld, my friend, your friend, everyone’s friend, passed away on Sunday November 14 at the age of 83. The battle with dementia was one this gallant little chap from Maryhill could not win.

And, so, we are left with our memories of a special man, a true Celtic icon who graced the beautiful game’s stage with a graceful swagger and majestic talents. And a cheeky grin.

On a personal level, Bertie has gifted me a treasure trove of reminisces. I was honoured when he invited me to write his book. It’s impossible to assemble someone’s life story and not get close to that individual. It was a joy to unite with Bertie as one extraordinary story followed another as the tome took shape.

We met once or twice a week in the Millennium Hotel just off George Square to put his journey through a memorable life down in print. As we all know, Bertie did not entertain mundane. The book was a pleasure to write.

Among his many attributes, he was a gifted storyteller. Through our many enjoyable hours together, his love of all things Celtic shone through. That genuine affection did not dim with time. If anything, it appeared to grow as the years rolled into history.

I recall a typical bitterly cold evening in December, the frost beginning to lay its pristine white carpet on the city. I was at home and it was closing in on ten o’clock when the phone shrilled. It was unusual to get a call around that time, especially at the weekend.

It was Bertie Auld on the line.

“Thought we could have a wee natter,” he said.

It was never a problem spending time with Wee Bertie, so I settled down, in the realisation “a wee natter” could easily stretch to half an hour. The line kept breaking up and I had to ask: “Bertie, where are you?”

“What brings you out on a night like this?” I asked logically. “Shouldn’t you be at home with Liz with your feet up in front of the fire and waiting for Match of the Day?”

“I’m on my home from Fife,” said Bertie. “I’ve just been at a Supporters’ Night with one of the local clubs.”

“I hope they weighed you in,” I said, semi-serious.

“No, don’t be daft,” said Bertie, almost bristling at the notion of picking up cash for spending time with “the greatest fans in the world”, as he insisted on terming Celtic followers.

Bertie was unaccompanied on his drive home that cold winter’s evening. That call was made about five years ago when Bertie was in his late seventies. Now that is what I call commitment.

During the writing of his autobiography, which was published in 2008 and quickly went into reprint, Bertie presented me with a Celtic jersey signed by the eight existing Lisbon Lions. It was a lovely gesture, so typical of the man. 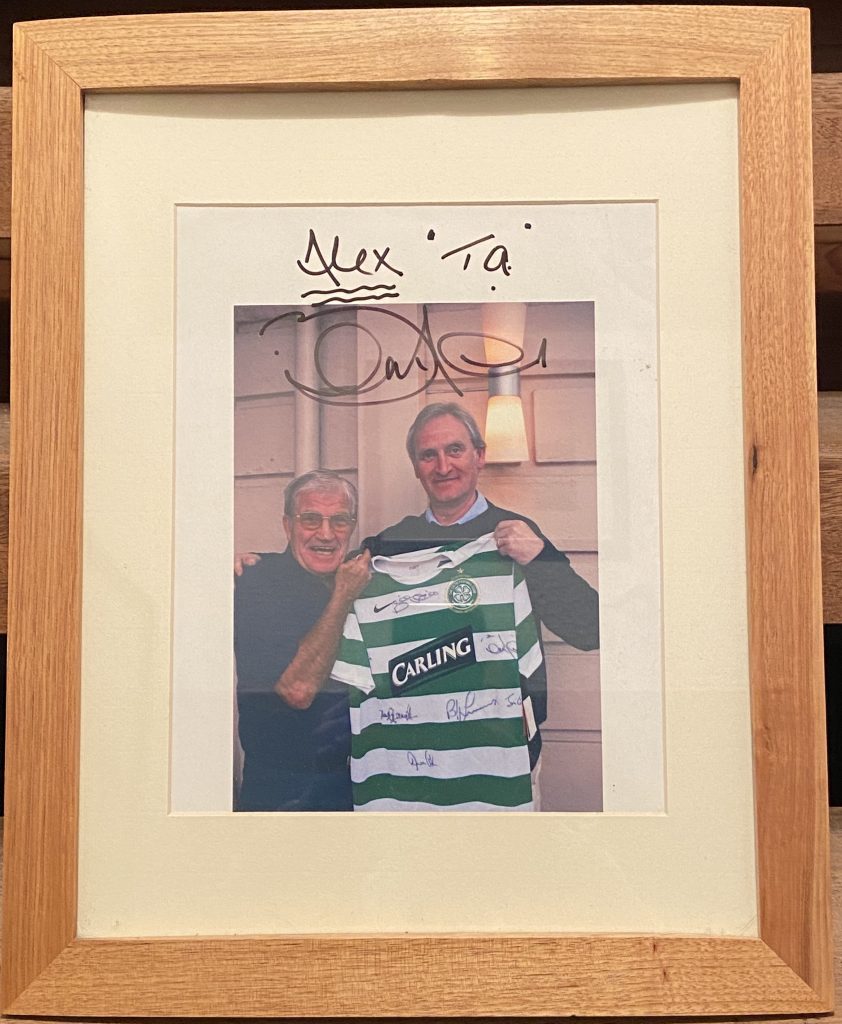 My wife Gerda took a snap of the “presentation” as Bertie and I held up the top and the image was captured for posterity.

A week or so later, I asked Bertie to sign the photograph for me. He wrote: “Alex, Ta” and signed it.

That photograph is now in a frame and has pride of place in my study/dungeon where I work. I look at the image every day. And it makes me smile.

Bertie Auld possessed that magical power to take you into an area in your life where you can only look back with fondness.

I was extremely fortunate to spend time with this wonderful man and, of course, my deepest sympathies are with Liz – or “Lemon Fizz, as Bertie liked to call his wife – son Robert, daughter Susan and the rest of his family and friends on this exceptionally emotional day.

Like so many others, I will be denied the presence of Bertie Auld in my company for the rest of my days.

But the glorious memories of this remarkable wee Glaswegian will never diminish.