NEW Bhoy Vakoun Issouf Bayo is standing by to make his Celtic debut in the Scottish Cup-tie against St Johnstone at Parkhead tomorrow afternoon.

The Ivorian international striker, who agreed a £2million switch from Slovakian club Dunajska Streda last month, was within SECONDS of his first appearance during the 2-0 win over Hibs in midweek.

Bayo was poised on the touchline with Brendan Rodgers ready to send him on for the last eight minutes.

Unfortunately, the powerful frontman had to return to the subs’ bench after Emilio Izaguirre was crocked following a wayward lunge by the Easter Road side’s Darnell Johnson. The Honduran had to be stretchered off and the Hoops gaffer was forced into a swift change of mind and send on Jonny Hayes as a direct replacement at left-back.

Bayo has been omitted from Rodgers’ Europa League squad for the double-header against Valencia with the first leg due on Thursday and the return at the Mestalla Stadium seven days later.

The 22-year-old frontman has not played a competitive match since December 8 before Slavakian football shut down for the winter break.

The Irishman reckons the games have come  just too quickly for his player, but is eager to see him in action and he will get a place on the bench against Saints with the view to giving an opportunity to show what he can do at some stage in the second-half.

Rodgers said: “Vakoun was excited to get on, but I could only cuddle him. 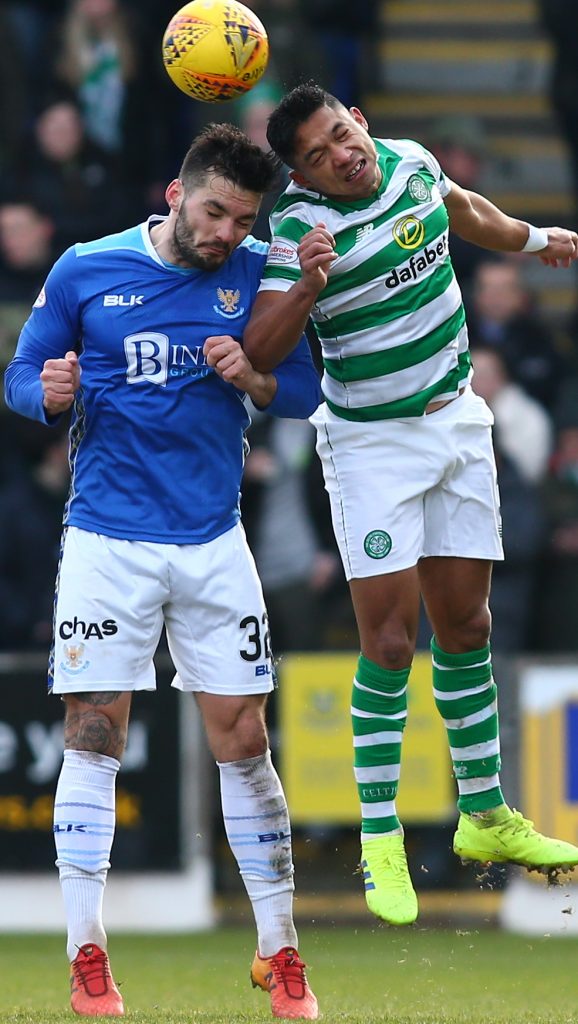 HEADS IN WIN…Emilio Izaguirre clears from former Celtic team-mate Tony Watt in the 2-0 win over St Johnstone last week. The Honduran is doubtful for tomorrow’s Scottish Cup-tie against the Perth outfit. Pic: Geo.

“It reminded me of a young lad, Gwion Edwards, who is now at Ipswich Town. In my last game at Swansea, we were playing Liverpool.

“We were 1-0 up and he had done really well for the youths. I was trying to get him on for about five minutes, but we were managing the game brilliantly and we were keeping the ball.

“I was shouting at Leon Britton to kick the ball out, but they were too programmed to keep it. Gwion was still standing there when the final whistle went! I felt for him.

“Vakoun will get his time. He is training well, but we had to put him through a mini pre-season because he hadn’t done much before he joined us.”

Izaguirre is a doubt for tomorrow, but, together with a string of absentees, has a chance of facing Valencia.

Rodgers added: “Olivier Ntcham and Odsonne Edouard are back training, and Kieran Tierney has returned to the group, which is good.

“Kieran looked good this morning, but it’s about general fitness now. He has been out for quite a while, so it’s about time.

“We will see about next week. I wouldn’t rule him in or out. Sunday might be a bit too close for him – but at least he’s out on the pitch.

“James Forrest is back training as well, Dedryck Boyata came through against Hibs well and Kristoffer Ajer is available.

“We are slowly getting them back.”