SCOTT BROWN is on a revenge mission when Celtic face Cluj in the Europa League Group E encounter at Parkhead on Thursday evening.

The Hoops skipper had an off night when the Romanians triumphed 4-3 in Glasgow last month to send Neil Lennon’s men into Champions League oblivion at the qualifying stage.

It wasn’t long before Dan Petrescu’s side joined Celtic in Europe’s secondary competition when they lost home and away to Slavia Prague in the play-offs.

Brown, for reasons only known to himself, needlessly handled a corner-kick to throw Cluj a lifeline when they were trailing 2-1. They accepted the gift and buried the penalty-kick beyond Scott Bain on their way to a sensational victory, Lennon’s team’s only defeat this season.

The 34-year-old midfielder, speaking to the Daily Record, said: “We didn’t perform the way we should against them last time. That’s what we want to put right this time.

“It’s going to be a good game. We know how they play and they know how we play. I think we owe them one, to be perfectly honest. And especially me. 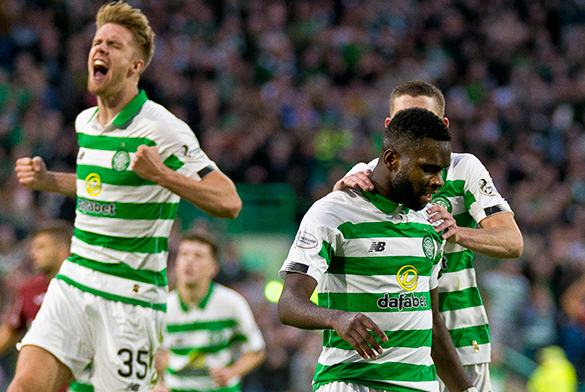 THE DELIGHT…Kristoffer Ajer displays his joy after Odsonne Edouard had struck against Cluj.

“In the last match, I gave away a handball and that’s not like me. It was just one of those freak things that happened.

“I’ve got a lot of things in the back of my mind. There is a big book there, but you don’t dwell on it too long.

“The good thing about football is that there is another game three or four days later where you can go out there and show everyone wrong.

“It was a disappointing performance and their win at our place adds a wee bit extra to the game. We know what to expect from them. They got the better of us so we want to put the record straight.

“It was just one sloppy game where we probably didn’t perform as well as we should have.”

Brown added: “It was a weird night, but it was a big kick up the backside. We need to maintain a certain standard at this club throughout the season and it was a huge disappointment for us going out of the Champions League. 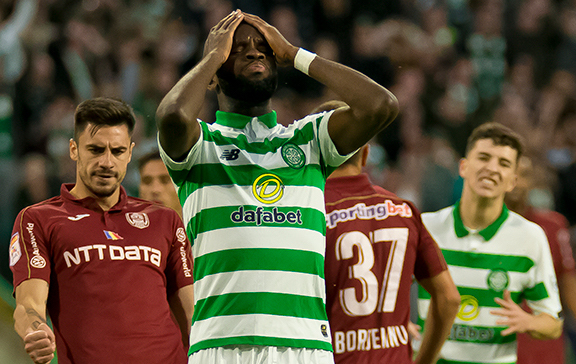 THE DESPAIR…Odsonne Edouard can’t believe it after another scorned chance.

”They will come here confident as well and played really well the last time.

“We played really well against them away from home, too, when we got a draw. But we need to make sure we start to make Celtic Park into a fortress yet again.

“I think the Europa League, and the Champions League, is getting harder and harder.

“The teams we’ve faced haven’t exactly been the easiest. But that is football. You want to compete against these teams and try to get the three points, especially at home.

“It is the fans, the fantastic support, that helps us out. You can ask a lot of players about it. They feel it, as well.

“The crowd get right behind us with every single tackle, every forward pass, and every chance that we create.”

The eight-in-a-row champions got off to a solid start in their first group game in France when they picked up a point in the 1-1 draw with Rennes.

It was a polished performance from Lennon’s outfit in Brittany where centre-back Christopher Jullien, dropped for the home game against the Romanians, looked like a £7million player.

The Scots will be looking for a repeat from the Frenchman and his team-mates again this week.