CQN paid tribute to Big John Hughes, the original ‘Yogi to Celtic fans, as he celebrated his 76th birthday yesterday.

To mark the fabulous occasion and, as a round of applause to the Hoops’ seventh-highest scorer with 189 goals, we are publishing EXCLUSIVE extracts from his autobiography, ‘Yogi Bare: The Life and Times of a Celtic Legend’ which was co-authored by Alex Gordon.

Over the next four days, CQN will be dipping into Yogi’s memories of tumultuous encounters against Rangers.

Here is today’s offering from the Hoops legend.

MEETINGS with Rangers could often produce fireworks. I will never forget my first league appearance in these fraught fixtures on an unforgettable – for all the wrong reasons – Saturday afternoon on September 10 1960.

I was seventeen years old and had already played against the Ibrox side on two occasions in the League Cup earlier in the season which I will talk about later in this chapter. I was absolutely bursting with anticipation before the confrontation and manager Jimmy McGrory didn’t have to fire me up for the occasion.

Which was just as well because, as you will have undoubtedly gathered by now, he was a man of few words. I ran out onto the park to be greeted with a packed crowd, one half green and white, the other predominantly blue. That’s the way they did it in those days. Rangers got half of Celtic Park for their supporters and we had a similar arrangement for our fans at Ibrox. 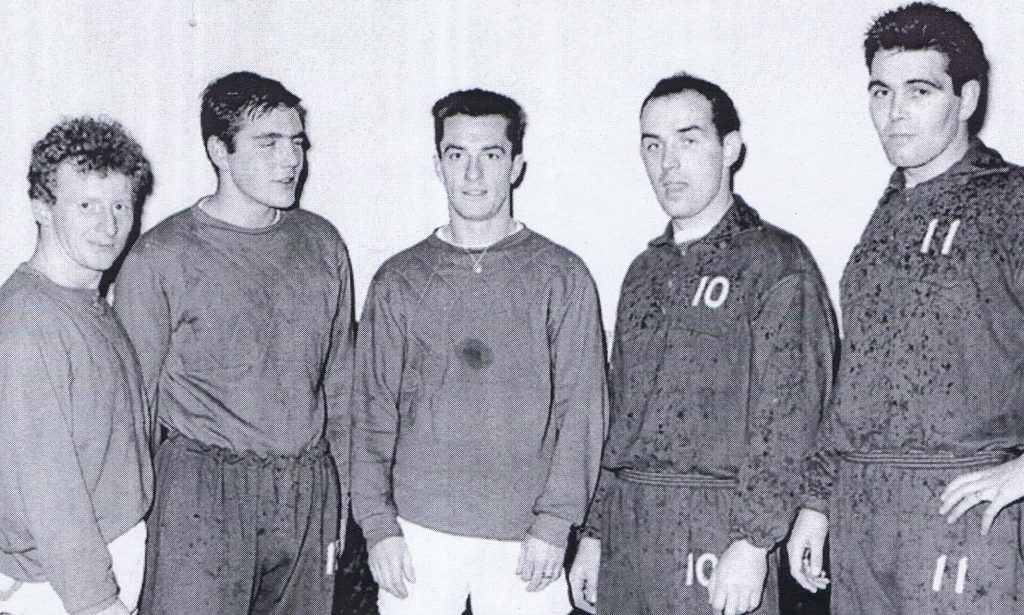 I have to admit it was an extremely strange occurrence when one team scored and one half went doolally with delight and the other was cloaked in silence.

On that particular day, I looked around the Celtic dressing room and saw colleagues such as Dunky Mackay, a superb right-back who was ahead of his time. He liked to push forward, but that was frowned upon by the less-than-gifted backroom staff who were hardly blessed with tactical genius. God help the full-back who dared to venture across the halfway line.

Paddy Crerand, already a Scottish international, was in the right-half berth while the celebrated Northern Ireland captain Bertie Peacock was on the left. A bloke called John Kurila – nicknamed ‘Gorilla’ – was in between them at centre-half. He did his best to live up to his nom-de-plum. Stevie Chalmers, pacy, direct and alert, was in attack alongside John Divers, a player who was completely under-rated at the club. I found myself lining up at outside-left.

I knew all about the Rangers right-back and skipper Bobby Shearer. He was known as ‘Captain Cutlass’ and I don’t think that was a testimony to his elegant footballing skills. He was the type of defender who could pass the ball about one hundred yards. I was soon to find out that he would try to reach the same distance with an opposing winger.

Bobby was a lovely guy off the field, all very friendly and suchlike. On the pitch, he was an animal. The Ibrox stalwart would sidle up to me and whisper in my ear, ‘Try that again, kid, and I’ll break your f*****g leg.’ Nice to meet you, too, Mr Cutlass.

However, it wasn’t Rangers’ stocky wee right-back who made the biggest impact on me that afternoon. That honour fell to Harold Davis, a lump of granite masquerading as a right-half. He was known as ‘a real Rangers man’. I reckoned that meant he would kick lumps out of his granny in the Ibrox side’s cause.

It must be said that Davis had such limited footballing ability that he never won a single Scotland cap and those were the days when it seemed you just had to walk through the front door at Ibrox to have international reckoning thrust upon you.

My goodness, even the pedestrian Shearer represented his country four times. Mind you, one of those occasions was the 9-3 defeat from England at Wembley in 1961, so that might tell you all you need to know. (We’ll overlook the fact that Celtic’s Frank Haffey was in goal that afternoon.)

Davis was seen by some as a war hero after fighting in the Black Watch Regiment during the Korean War in the early fifties. He was injured after being hit by shrapnel and was hospitalised for about two years. Apparently, his disability pension was still valid while he was turning out every week for Rangers. Interesting, that.

Anyway, he was twenty-seven years old when I faced up to him in the east end of Glasgow that September afternoon and it seemed to me that he believed it might be a good idea if yours truly ended up in casualty for a lengthy spell. It breaks my heart to recall that game, but Rangers trounced us 5-1.

As a matter of fact, Stevie Chalmers got our consolation goal in the last minute to prevent that reverse being our biggest loss to the Ibrox side in the Twentieth Century. I wouldn’t have wanted that stain on my CV. 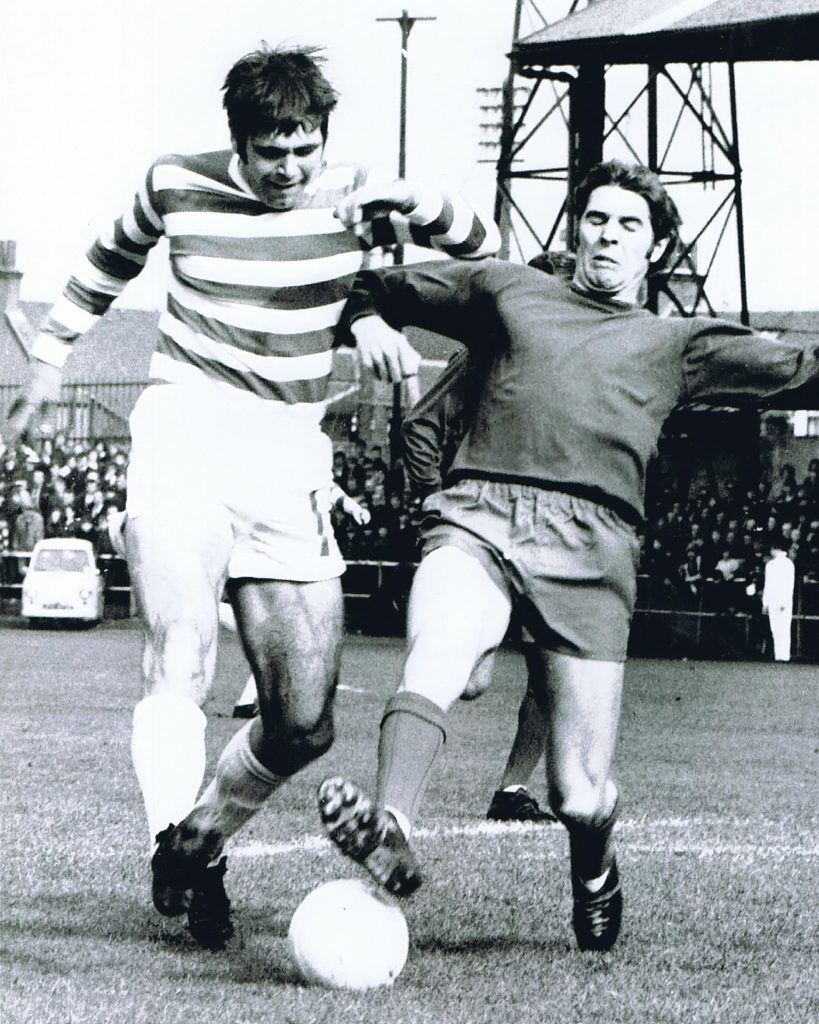 I was reminded how painful such an emphatic Old Firm defeat can be, physically as well as mentally, at one stage during the second-half. Sadly, it was a one-way procession towards John Fallon and it appeared the likes of Ralph Brand, Jimmy Millar and Davie Wilson were queuing up to take pot shots at our exposed goalkeeper.

Rangers were leading 4-0 when someone managed to get the ball out of our half. I turned to chase it when I suddenly felt this sharp pain in the pit of my stomach. Harold Davis had just delivered a punch to my solar plexus that Floyd Paterson, the world heavyweight boxing champion at the time, would have been proud to claim as one of his own.

It wasn’t an elbow or a shoulder charge or even a push; it was a sneaky punch delivered as hard as possible by the Korean war ‘hero’. I went down in a heap, the wind completely taken out of me. The referee either didn’t see it or didn’t think it warranted a foul on our behalf and took no action. Possibly Celtic should have complained to higher authorities.

So, that was my first meeting with Harold Davis, an individual who was fighting in Korea while I was still at my Coatbridge primary school. I didn’t look for any special dispensation or consideration while playing for Celtic as a raw youngster, but neither did I expect a belt in the guts from a so-called model professional.

I learned there and then that you had to grow up very swiftly in this no-punches-pulled – literally – environment. The Rangers player would never have realised it, but he did me a massive favour with his pathetic and devious act. It made me understand I would always have to stand up and be counted in the frantic, hell-for-leather atmosphere of a Glasgow derby, where, clearly, no favour was asked or given. Lesson learned.

Davis was nowhere to be seen when we played Rangers in the 1962/63 Scottish Cup Final. By that time a youthful John Greig had taken his place and the man who would go on to captain and manage the club looked as though he had picked up a hint or two from his old team-mate.

The first game ended 1-1 where our goalkeeper Frank Haffey was clearly the Man of the Match. Big Frank was one of the most unpredictable footballers I have ever witnessed. He would make a spectacular save and you had to rub your eyes to make sure it was Frank in goal. In the same game, he could make a mess of a harmless passback.

At Hampden, though, on this May day he answered all our SOS calls. He was magnificent. So, too, was a wee lad on the right wing by the name of Jimmy Johnstone. He was utterly fearless as he tormented David Provan throughout the game. We all thought he was outstanding.

I played through the middle of that encounter with Ronnie McKinnon as my direct opponent. I thought I had done reasonably well and Bobby Murdoch got our goal after Ralph Brand had somehow nicked one past Haffey.

However, as we prepared for the replay the following Wednesday, chairman Bob Kelly made one of the inexplicable decisions that permeated around the club at the time. Wee Jimmy was dropped and Bobby Craig, signed the previous year from Blackburn Rovers, was handed the right wing berth.

Just as bewildering, I was told I was being moved to outside-left with Stevie Chalmers coming in to lead the attack as Frank Brogan, a very fast and direct winger, made his way to sit in the Hampden stand beside Wee Jimmy. It was all very puzzling and I won’t dwell on this game that ended with Rangers dominating proceedings throughout.

Jim Baxter strutted around like he owned the place and there was little we could do by way of resistance. The Ibrox side won 3-0, but it was over before the interval. The eccentric Haffey failed to cut out a low right wing cross in the opening minutes and Ralph Brand tucked the ball in from virtually under the crossbar. 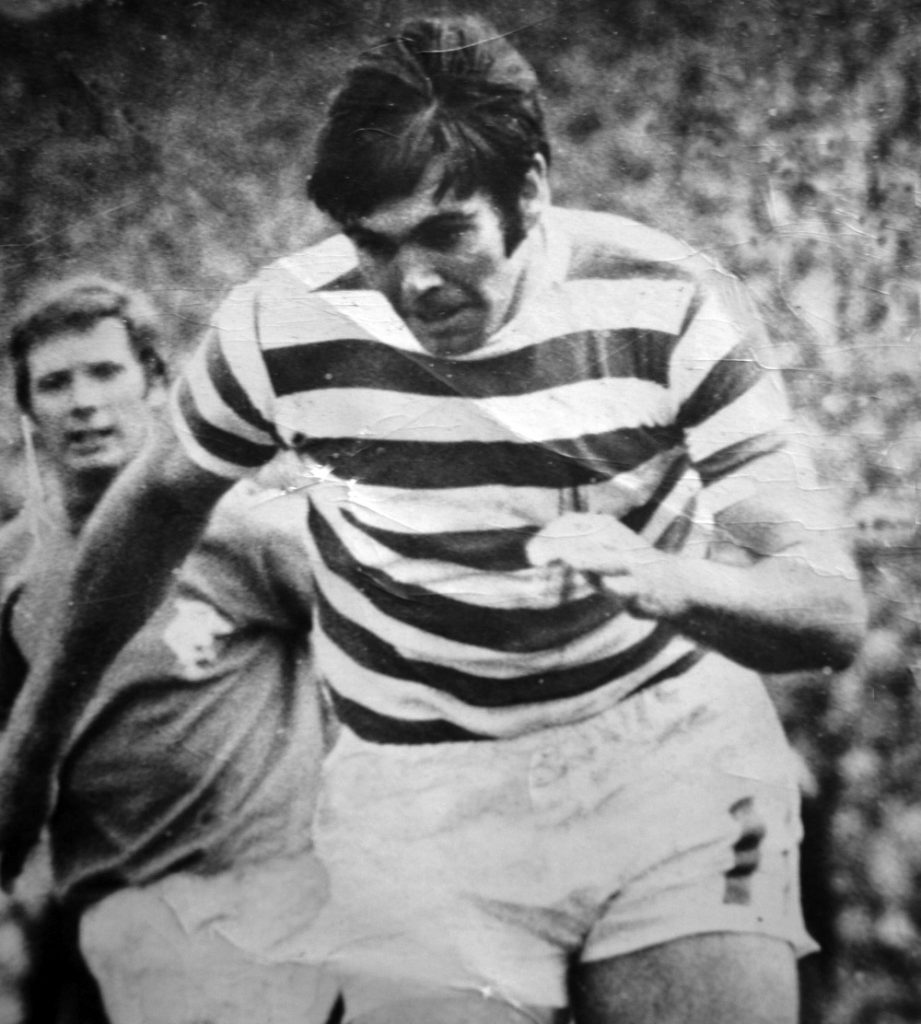 Davie Wilson netted another before half-time and this time Haffey couldn’t be blamed. However, he was lamentably slow in diving for a half-hit twenty-five-yard effort from Brand and the ball crept in at the post for their third. There were still nineteen minutes to go and that was the signal for most of our fans to get out of Hampden.

Frankly, they couldn’t stomach any more and it was a painful experience for the players, too. It was also the club’s fourth consecutive Scottish Cup Final defeat since 1955.

I’ve got nothing against Bobby Craig, but he had a stinker. Big David Provan must have been the most overjoyed Rangers player BEFORE the kick-off when he was told Jimmy Johnstone had been removed from the first team. Maybe he thought the Wee Man was injured.

I can tell you he was fit and raring to go. And as mystified as the rest of us to why he wasn’t lining up that evening. By the way, that was Craig’s last game for the club before he was offloaded to St.Johnstone in the summer.

That was the Celtic way at the time. One minute you were important enough to play in a crucial Scottish Cup Final and the next you were out the door. Crazy!

TOMORROW: Big Jock gives me a rollicking for a Hampden defeat from Rangers!