CELTIC will meet Everton in the second game of the Sydney Super Cup during Ange Postecoglou’s ‘homecoming tour’.

The Goodson Park outfit have taken the place in the competition vacated by Giovanni van Bronckhorst’s Ibrox club, as mentioned in CQN at the start of the week.

The champions will now face Frank Lampard’s team at the Accor Stadium on Tuesday November 20 after opening the tourney three days earlier against Sydney FC at the Allianz Stadium. 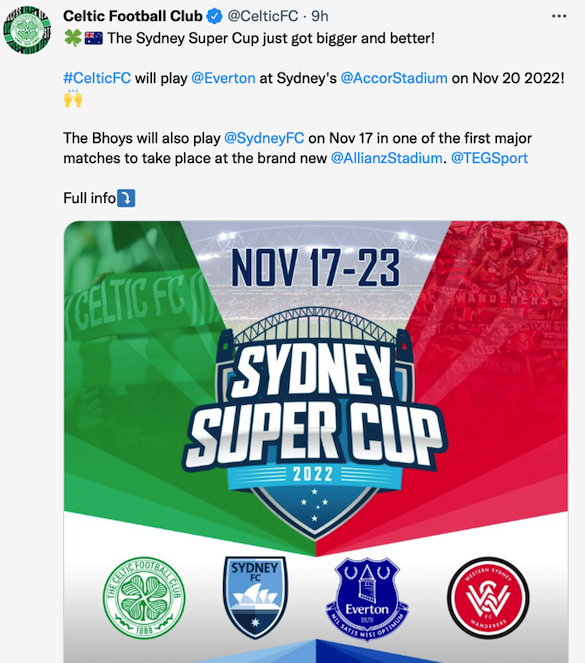 The Parkhead club confirmed the inclusion of the Merseysiders in a tweet which read: “The Sydney Super Cup just got bigger and better! #CelticFC will play @Everton at Sydney’s @AccorStadium on Nov 20 2022! The Bhoys will also play @SydneyFC on Nov 17 in one of the first major matches to take place at the brand new @AllianzStadium @TEGSport.”

The Govan side withdrew from the mini-competition when reports claimed Celtic were earning DOUBLE in appearance money from the Aussie sponsors.

The matches in Sydney will be played as the World Cup Finals prepare to kick off in Qatar on November 21 with the trophy showdown scheduled for December 18.