THE world of football was awash with emotion yesterday as we said farewell to Celtic legend Billy McNeill.

The Lisbon Lion, the club’s greatest-ever captain, sadly passed away on Monday, April 22, at the age of 79 following a brave battle against dementia.

MY dear brothers and sisters, we gather here at St Aloysius’ Church in Garnethill, Glasgow, to offer this Funeral Mass in thanksgiving to God for the life of Billy McNeill and for the happy repose of his soul.
We offer our heartfelt and prayerful sympathies to Liz, Billy’s loving wife, to whom he was married for a wonderful 56 years. We offer our sincere condolences also to Billy’s children, Susan, Carol, Libby, Paula and Martyn, who have lost their Dad whom they loved dearly. Billy had eight grandchildren. They miss their Grandad. We all recognise the unique bond of love and affection that exists between a grandad and his grandchildren. We offer our sympathies to all other family, relatives and close friends. We are aware that Billy had a few hard years with his health before he died, which he endured with dignity and courage, but now he is at peace. With you, we commend him to God and pray for his eternal rest. 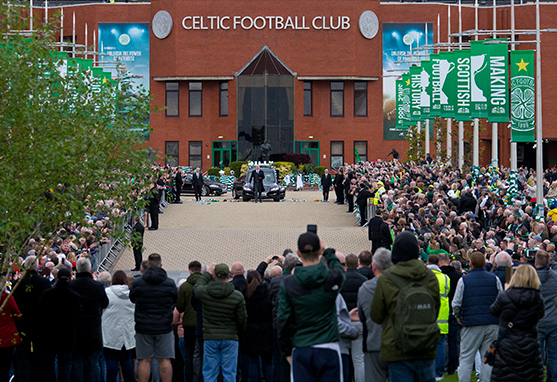 As Glasgow Celtic’s most famous captain, Billy also belonged to another family, the Celtic family, who adored him as their hero and who mourn his passing. He has already gone down in history as a Celtic legend, captain of a team of legends, the Lisbon Lions. Under their brilliant manager, Jock Stein, this unique Celtic team made footballing history by becoming the first British football team to win the mythical and coveted European Cup, on 25th May 1967 in the Estadio Nacional, Lisbon, defeating Internazionale of Milan 2-1, at that time the pride of Italian football. As a 16 year old boy, I watched with overflowing joy as Billy and his Lions lifted the European Cup. Never for a moment did I imagine that I would be conducting his Funeral Mass. I assure Liz and her family that it is a great honour for me to do so.
I offer my sympathies to Billy’s surviving Lisbon team-mates, Jim Craig, John Clark, Willie Wallace, Bertie Auld and Bobby Lennox, together with Charlie Gallagher, John Hughes, John Fallon, and other fine players, who have seen another of their number succumb to time and human frailty, as we all eventually must. It is right that we should mention today Stevie Chalmers, another of that famous band of Lisbon brothers and lions, who has also passed away in these days, the scorer of the winning goal in that fabled football match in Lisbon. May Stevie too rest in peace, along with Billy himself, and with Ronnie Simpson, Tommy Gemmell, Bobby Murdoch, Jimmy Johnstone and other dearly departed Celtic heroes of that unforgettable squad. 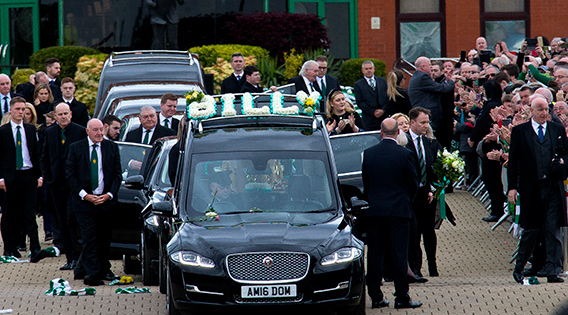 THE FINAL SALUTE…the McNeill family stop to lay flowers at the statue of the Celtic great.

Everyone remembers Billy holding up the European Cup in Lisbon. What a sight that was! His already imperious presence and stature was magnified by the achievement, by the accolade and by the context. Billy McNeill, the boy from Bellshill, Liz’s darling husband and father of their children, became public property. Beloved of the Celtic family, he was greatly appreciated also by the general Scottish public and by so many people across the world because he was the superb captain of the famous Lisbon Lions.

It has been heart-warming to witness during these days the outpouring of affection and sympathy for Billy across the spectrum of Scottish society and beyond. It seems that there has even been a new appreciation of the ground breaking moment that that Lisbon achievement by Billy and his Lions was for Scottish, British and European football.

In those amazing weeks of the spring of 1967, Scotland had beaten England the world champions at Wembley. Kilmarnock reached the semi-final of the Inter Cities Fairs Cup. Rangers reached the final of the European Cup Winners Cup, which both they and Aberdeen would win in the coming years. It was possibly a unique era for Scottish football. Undoubtedly the golden moment, the impossible achievement, probably never to be repeated, was in Lisbon when Billy and Jock Stein’s Lions, lifted the big cup, the European Cup.

And I am happy to say that I was there, on the vast sloping enclosure terracing of Hampden opposite the main stand, as a 15 year-old boy, with my Dad and my brother Michael, when Billy started it all off with his majestic header against Dumfermline in the 1965 Scottish Cup Final to give Celtic a 3-2 win. I can tell you, I was ecstatic! 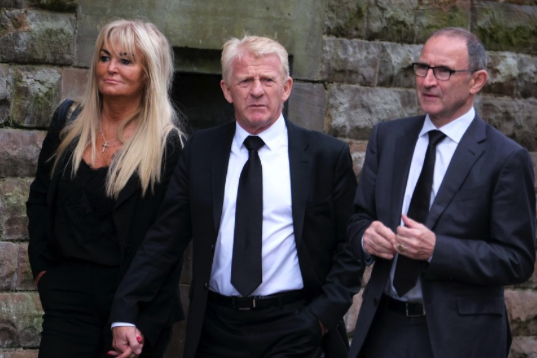 FORMER BOSSES…Gordon Strachan, with his wife Lesley, and Martin O’Neill arrive at the church.

A few months later, at the beginning of the 1966-67 season, from the old enclosure in front of the main stand at Celtic Park, I watched my Celtic team dismantle a star-studded Manchester United including Denis Law, George Best, Nobby Stiles, Bobby Charlton, and Paddy Crerand. The score was 4-1. Even though it was only a pre-season friendly, I thought to myself, dear Lord, we’re good. We could really do something this season. And we did. On the way, Billy repeated his Scottish Cup Final feat in the quarter final of the European Cup against Vojvodina when he powered in a late and decisive goal from Charlie Gallagher’s corner kick. I did not see that in real time because I was in seminary at that time. However, my Dad and my brother were representing me! As they say, the rest is history.

Liz and family, all this is by way of saying that Billy and his Lisbon Lions and their colossus of a manager Jock Stein won the admiration and respect of a whole nation, and that whole nation joins with you in sympathy and in prayer today for Billy.

Billy McNeill will remain in our hearts and minds undoubtedly as a football icon and a Celtic legend. At the same time, Billy was a family man who loved his wife and children. He treasured the intimacy of his family life. As with the best of heroes, he was blessed with an unassuming character. He never forgot his own origins and he always had time for ordinary people and fans. He had a quiet religious faith born of his Lithuanian roots in Lanarkshire. People remember his regular Mass attendance at his parish, St Cadoc’s, Newton Mearns, while he was still in good health. It was the present parish priest of St Cadoc’s who visited him as he neared the end of his life, and administered to him the Last Rites of the Church. He died surrounded by the love and prayers of his family. 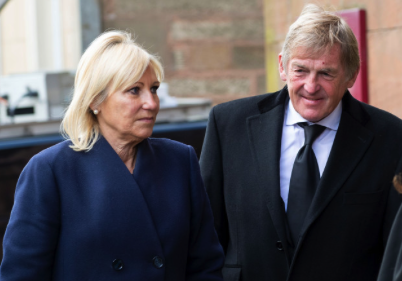 CELTIC ICON…Kenny Dalglish and wife Marina arrive for the service.

Today, at this Funeral Mass, we have heard the Word of God summoning us to trust in God, to virtuous living and to hope in eternal life. The Holy Eucharist is being celebrated for our spiritual nourishment and is being offered for Billy McNeill, one of the baptised. The principal intention and purpose of this liturgy is to put before us the person of the risen Christ. He is our hope. He is our salvation. It is because of him that we trust in God and follow the way of the Lord. It is because of Him –Christ Jesus – that we may hope for the forgiveness of our sins, for friendship with God, for peace with one another, for fullness of life in this world and in the world to come, and at the last to see God face to face. With faith and trust in him, the Lord Jesus, we offer Liz and her family prayerful consolation, affection and support. We appeal to this same Lord to save Billy out of death, fill him with the life of the resurrection, and give him eternal rest and peace in the kingdom of light. May he rest in peace.