Celtic Quick News on News Now
You are at:Home»Football Matters»BILLY McNEILL: CAESAR OR CESAR? LET’S HAVE YOUR VOTE!
By CQN Magazine on 24th August 2018 Football Matters

JOHN ‘YOGI’ HUGHES is adamant on the point: “Billy McNeill is known to his Celtic mates as Caesar after the Roman Emperor.

“Yes, I am aware the nickname originally came from a Hollywood actor by the name of Cesar Romero. That was back in 1960 when a lot of the Celtic players went to see a Frank Sinatra movie called ‘Ocean’s Eleven’.

“The likes of Big Billy, Bertie Auld, Mike Jackson, Pat Crerand and John Colrain watched the film one afternoon at the Odeon in Glasgow city centre and all decided to take nicknames from the cast.

“Wee Bertie became ‘Sammy D’ after Sammy Davis Jnr who was a black actor and comedian. It’s not very politically correct these days, but Bertie used to have this dark growth and had to shave about twice a day.

“Mike Jackson became ‘Dino’ after Dean Martin, the actor and singer. Mike was a bit of a chanter who could hold a note or two, so he became ‘Dino’.

“There was a straight-faced comedian called Joey Bishop in the movie, too, and Pat Crerand was lumbered with ‘Joey’ for a while before he returned to Paddy.

“John Colrain was an under-rated centre-forward who was a massive fan of Sinatra who played the title role of Danny Ocean who was the leader of a gang who were planning to rob a Las Vegas casino. So, he became ‘Danny O’.

“And Cesar Romero was the driver of the getaway car. Billy was the only Celtic player with a car back then, so he did all the driving. Hence he picked up the moniker ‘Cesar’.

“But that morphed into ‘Caesar’ after the European Cup Final in Lisbon in 1967. Big Billy just looked so imperious as he held aloft that huge trophy in the Portuguese capital with sunshine streaming down. 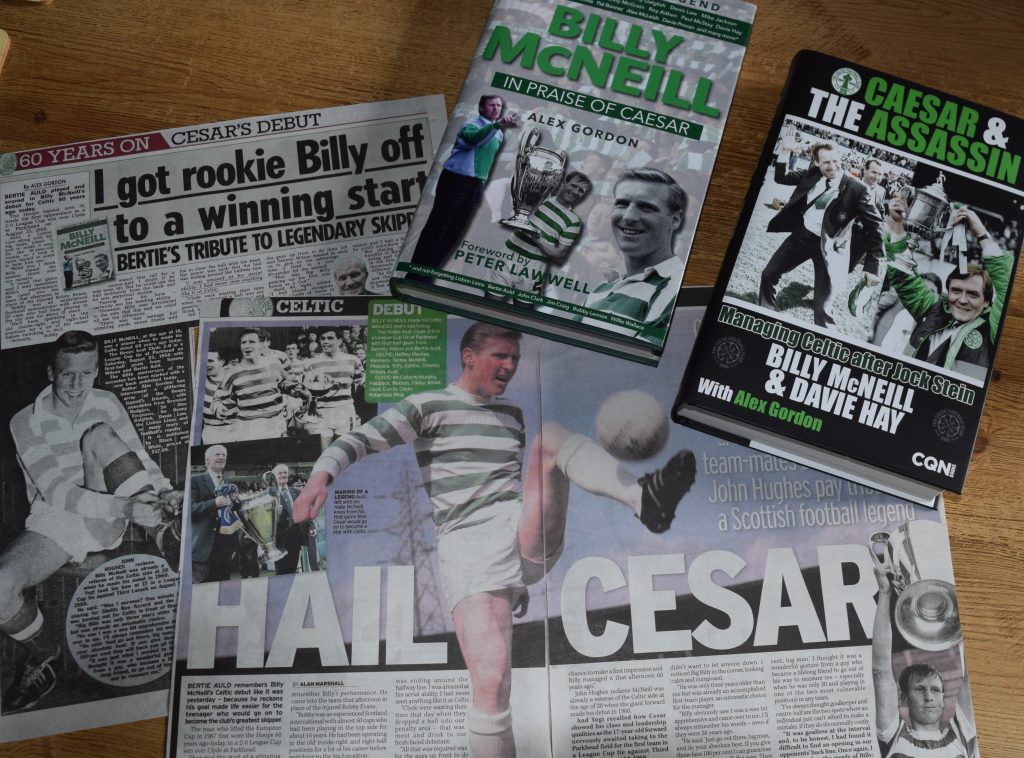 “To many of the Celtic supporters that is the most iconic image in the club’s history.

“So, what do you think? Caesar after a famous figure from history? Or a Grade B actor whose main claim to fame was appearing as ‘The Joker’ in the Batman TV series in the sixties?

Author Alex Gordon, whose latest Celtic book, ‘Billy McNeill: In Praise of Caesar’, has just been published, said: “I interviewed over 40 significant personalities in Billy’s career, friends and foes alike, for the tribute and they also went with the Roman Emperor.

“More than a few had never heard of Cesar Romero. Many believed it was just a different spelling of Caesar.

“I was well aware of the original ‘Cesar’, but I agree with Yogi and the likes of Wee Bertie that the Celtic legend deserved a step up in class.

“That’s why I entitled another book in 2014 ‘Caesar and the Assassin’ about the Celtic managerial careers of Billy and Davie Hay, who, of course, was nicknamed ‘The Quiet Assassin’.

“I’ve known both these wonderful guys for decades and never once has Cesar Romero ever cropped up in conversation.

“So, I’ve always gone with ‘Caesar’ and not ‘Cesar’. I noticed in the newspapers yesterday, they were still calling him ‘Cesar’ after the actor.

“Actually, I asked the Hoops icon’s wife Liz if she had a preference. Logically, she replied: ‘No, not really, I’ve always called him Billy’. Seems reasonable, I suppose!”

Okay, Celtic fans, it’s time you had your say. What do YOU think? CQN will announce your verdict today after midday.

Who do you think Billy McNeill should be named after? Julius Caesar, the Roman Emperor, or Cesar Romero, Hollywood actor?