THE Celtic Family is mourning the death of Billy McNeill, the club’s greatest ever captain and one of the finest men to have played and managed the Hoops, who has passed away at the age of 79. The wider football family, too, will be in mourning at the loss of this great man.

Celtic Football Club’s deepest condolences and heartfelt prayers go to Billy’s wife, Liz, their children, Susan, Paula, Libby, Carol and Martyn, grandchildren and all his many family and friends at the extremely sad time.

Billy McNeill was a Celtic player, manager and ambassador. First and foremost, however, he was always a Celtic supporter and his love for the club was evident throughout his life.

In the intervening years, he made an incredible 790 competitive appearances for his beloved green and white Hoops, more than any other player in Celtic’s long and illustrious history. Even more impressive is the fact that not one of those appearances was as a substitute. When Billy McNeill was fit, he played. It was as simple as that.

He also scored 34 goals, including some vital ones such as the winning goal in the 1965 Scottish Cup final and the winner against Vojvodina in 1967 that put Celtic into the semi-final of the European Cup.

The man known simply as ‘Cesar’ captained the team during the golden era of the late 1960s and early ‘70s under the stewardship of Jock Stein, winning nine league titles in a row, seven Scottish Cups and six League Cups. He also cemented his place as a Celtic legend on May 25, 1967 when he held aloft the European Cup in Lisbon’s Estadio Nacional after leading the team to a 2-1 victory over Inter Milan. He also reached another European Cup final in 1970, as well as two semi-finals in 1972 and ’74. 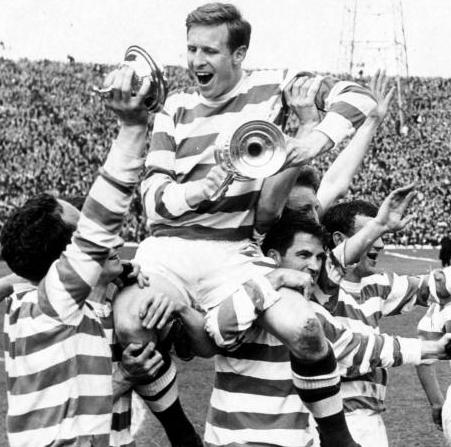 GLORY BHOY…Billy McNeill is lifted by Celtic team-mates after scoring the winning goal against Dunfermline in the 1965 Scottish Cup Final.

When he did finally hang up his boots, it was as a cup winner, leading Celtic to yet another Scottish Cup triumph in 1975. He held aloft the trophy, as he did so often throughout his career, before his Celtic team-mates held him aloft on the pitch, acknowledging his greatness and the debt that Celtic Football Club owed to him.

His association with Celtic did not end there, however, and he returned as manager in 1978 after short spells with Clyde and Aberdeen, with his friend and fellow Lisbon Lion, John Clark, joining him in the dugout as his assistant. And in that first season, they led Celtic to one of the most memorable championship wins in the club’s history, when the title was scored with a 4-2 win over Rangers that will be forever known as the night ’10 men won the league.’

Billy’s Celtic team went on to win the Scottish Cup the following season and then back-to-back titles in 1981 and ’82. He left Celtic in 1983, and managed both Manchester City and then Aston Villa before returning to Paradise in 1987 for the start of the club’s Centenary season, guiding the Hoops to a memorable league and Scottish Cup double.

That Celtic team epitomised the best traditions of Celtic and embodied the character of Billy McNeill – always wanting to play football ‘the Celtic Way’, with enormous pride in the green and white Hoops and with an incredible desire to win and never give up that saw many last-gasp victories achieved when other clubs might have given up.

The season following the Centenary Double, Celtic retained the Scottish Cup with a 1-0 win over Rangers in the final.

In 1991, Billy left Celtic again, but remained a regular and extremely popular figure at Celtic Park, particularly on a matchday. In 2009, he became a club ambassador, while six years later, in December 2015, a magnificent statue of Cesar holding aloft the European Cup was erected at the front of the Celtic Way, ready to greet all visitors to Billy’s beloved Celtic Park.

Like all of his fellow Lisbon Lions, Billy remained a humble man despite the extraordinary success he achieved in football, once saying, ‘I have been fortunate enough to have served the club as a player, captain and manager, and I enjoyed every experience I had at Celtic Park, I enjoyed everything.’

The Celtic supporters, of course, in idolising one of their own, were the fortunate ones to have seen Billy McNeill play and manage the club that they, and he, always loved.