TODAY marks the 51st anniversary of Celtic beating Inter Milan 2-1 in Lisbon to become the first British team to win the European Cup.

It was the most famous triumph in a proud club’s illustrious history. Here is an exclusive edited extract from Alex Gordon’s ‘The Lisbon Lions: The 40th Anniversary’ book which was published in 2007 by Black and White.

This is skipper supreme BILLY McNEILL’S thoughts on the momentous day in the Portuguese capital.

STIRLING ALBION’S Jim Kerray gave me a harder time at Celtic Park in November 1966 than Inter Milan’s Sandro Mazzola at the Estadio Nacional in May 1967. Jim Who? Well may you ask.

I hope Big Jim doesn’t mind me making this observation, but he was a journeyman centre-forward playing in a fairly average side. We all know who Sandro is, though, don’t we? A year before we faced Inter Milan in Lisbon, Mazzola had played for the Italian World Cup side in England. Three years after Lisbon, he would lead the attack in the World Cup Final against those wonderful Brazilians in Mexico.

Jim? I can’t recall him ever being mentioned for a possible call-up for his country. However, what I do remember is an evening in Glasgow six months before we played in the European Cup Final and Stirling Albion, who always seemed to spend their time battling relegation when they were in the top division, stuck three past Ronnie Simpson in a league match.

If my memory serves correctly, Kerray got two that night. As he was my direct opponent, I couldn’t have been too satisfied with my own performance. Mind you, we scored seven at the other end to win the match, but Stirling Albion and Kerray had let us know we were in a contest. In fact, so much so that I missed our next league game, a 1-1 draw with St.Mirren through injury, the only league encounter I sat out that season. 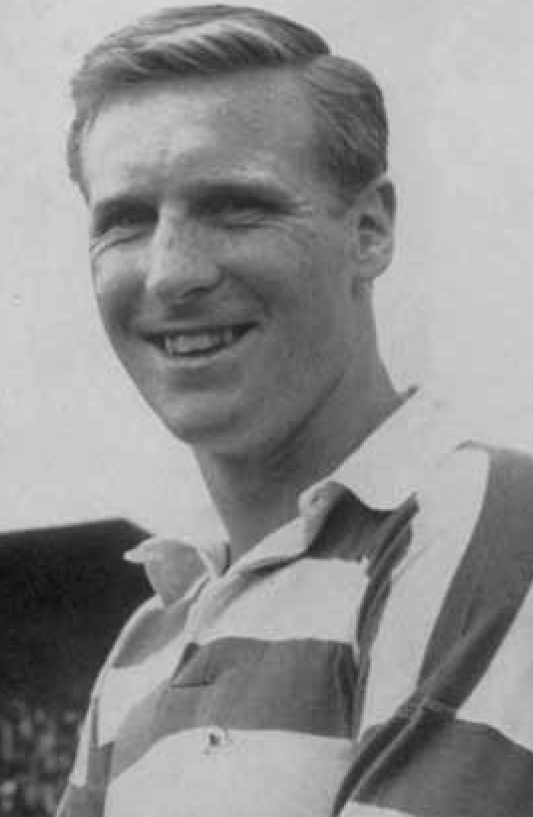 YOUNG BHOY…a teenage Billy McNeill at the start of his remarkable Celtic career.

I mention Big Jim simply because he gave me such a difficult 90 minutes that Wednesday night. Now I look back at Lisbon and I can honestly say that was the easiest match of the entire season. I really mean that. John Clark and I were rarely under any pressure because the other guys in the middle and up front were doing their jobs so well. My biggest problem that day was whether to pass it out of defence to Bobby Murdoch or Bertie Auld. I would gather the ball and suddenly there was a shout in unison: “Give it here, big man!” I would look up and there was Bobby and Bertie urging me to pass the ball to them and let them get on with it. If only all games had been such a cakewalk – I could still have been playing today!

We discovered fairly swiftly on our travels that reputations meant little or nothing in this game. Some of the biggest names, the so-called superstars of their era, often disappointed. But guys such as Jim Kerray were honest, hard-working pros who went about their job when phenomenal enthusiasm and genuine determination.

Of course, Big Jock Stein was the master of psychology and he proved that once more before kick-off in Lisbon. He and the rest of the backroom staff, including substitute goalkeeper John Fallon, came onto the pitch after we had been led out. Celtic were listed as the home team for the game and Jock and Co, naturally enough, headed for the bench on the touchline allocated to the home side. Jock was confronted by Inter Milan manager Helenio Herrera and his backroom boys who were already seated and waiting for kick-off.

Our gaffer was having none of that. If the wily Herrera had thought he was putting one over on our gaffer he was swiftly put right. “Your in the wrong place,” said Jock. Herrera understood alright, but he was simply looking at our manager with a typical Latin quizzical expression. Shoulders were hunching this way and that, hands were splayed out and, of course, the Inter Milan boss was innocence personified. Jock refused to back down. He would be sitting on that bench or there were going to big problems for the officials before the start of the 1967 European Cup Final.

Jock called over my stand-in centre-half John Cushley for him to have a word with the Inter staff. John wasn’t stripped for the game, of course, because only the goalkeeper could be used as a substitute, but it is no exaggeration to say Big John wasn’t unlike the Incredible Hulk without the green dye. If he hadn’t been a fine footballer he would have been in great demand as a minder for some sort of celebrity. He must have made his considerable presence felt. After a few words, Herrera and his entourage decided it would be wise to beat a hasty retreat and walk the considerable distance to the away bench.

Now, all this was going on while we were out on the pitch warming up. We were aware that something was happening at the side of the pitch and we witnessed Big Jock making his stance. It was highly interesting to see the Inter Milan bench capitulate and move on. They didn’t look a happy bunch as they picked up their kitbags and were forced to shift. One up to us before a ball had been kicked!

THE LEADER…Billy McNeill shows the way as he leads Celtic into action.

We were invited to take the game to the Italians and it was an invite we so readily accepted. We really should have been in front by half-time, but their goalkeeper, Giuliano Sarti, was quite outstanding. When we got in at the interval, we couldn’t wait to get out to restart the second-half. The penalty-kick decision really inspired us. We were all rattling on about the injustice of it and there was no way we were going to be beaten by a dodgy refereeing decision.

Cairney, Jim Craig, won’t thank me for this, but, having watched the incident several thousand times, I now think the referee called it right. Back then, though, we were all united in believing the match official had done us no favours whatsoever. I know Cairney will still argue that it was never a spot-kick, but let’s just say it certainly acted as a catalyst for us to get out there and turn them over.

I recall it was actually quite calm in our dressing room at half-time. There were no histrionics and, of course, we didn’t have any prima donnas in our team. Big Jock simply repeated: “Keep doing what you are doing and we’ll be okay.” He did make one telling observation, though, when he asked our wide men to think about pulling the ball back closer to the edge of the penalty box because Inter were crowding into the six-yard area as they tried to protect their goalkeeper.

When you look again at our first goal, you’ll see how good that advice was. Cairney was calmness personified when he came racing into the box onto Bobby Murdoch’s pass. His cutback for Tommy Gemmell was just right and Tommy simply belted one of his specials high into the net. Sarti had no chance. Eleven Sartis would have had no chance!

We were on course and nothing could stop us taking our place in history. Look, before that game the European Cup was a trophy that belonged to other teams. Glamorous sides from other parts of Europe. Only Real Madrid, six times, Benfica, twice, Inter Milan, twice, and AC Milan, once, had won the most prestigious prize European football had to offer. British football merely had its nose pressed up against the window, wanting to get in, but being completely ignored. Celtic, in Lisbon, opened that door. We proved it was possible. The mystique was stripped away. The barrier had been broken. And, by God, did it feel good!

Stevie Chalmers duly knocked in the winner with about five minutes to go and Inter Milan were out of it. They were a beaten team. If, by some chance, they had equalised, then the game would have gone to 30 minutes of extra-time. Believe me, those guys didn’t want to endure another half-hour of what they had already been through.

In Lisbon, we were a team on a mission. That European Cup had our name on it, we were certain of that. But, as I said right at the start, John Clark and I couldn’t have had a more comfortable 90 minutes. Inter simply had no answer to our pulsating, attacking play. There is absolutely no way they would have encountered anything like that in their league matches back in Italy. Inter Milan, and we should remember they also won the World Club Championship in 1964 and 1965, were top dogs, hugely successful and, therefore, it made sense to some coaches to copy their methods. We may have changed a few mindsets after our performance in Lisbon, eh?

To my mind, the greatest thing about our European Cup victory is that we did it in the Celtic manner. We always wanted to play with flair, adventure and style. We were determined for people to remember us for our attacking philosophy. I would like to think we managed that in Lisbon. It was a breakthrough for British football. It was marvellous for Scottish football.

However, the main thing for everyone connected with the club, the manager, his assistants, the players and tea ladies, it was truly wonderful for Celtic Football Club. 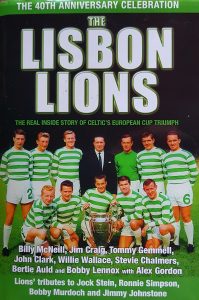