TODAY CQN kicks off a two-week tribute to Celtic legend Billy McNeill who sadly passed away on April 22 at the age of seventy-nine.

Author Alex Gordon interviewed over forty personalities, team-mates and foes alike, for their treasured memories of the former manager and captain in his book to honour the club great, ‘BILLY McNEILL: In Praise of Caesar’, which was published in August last year to coincide with the iconic captain’s debut for his beloved Hoops.

Here is the first EXCLUSIVE edited extract from the book to honour a marvellous Celtic servant, on and off the field, and a fine human being.

BILLY McNEILL was still a part-time player when, at the age of eighteen, he made his Celtic first team debut appearance against Clyde in a League Cup-tie at Parkhead on Saturday, August 23 1958.

McNeill had worked for the Lanarkshire County Council and then Stenhouse Insurance, a company based in Glasgow city centre, in his first three years at the club after joining from Junior side Blantyre Vics in 1957.

The future legend didn’t expect his rapid rise to promotion, but Celtic manager Jimmy McGrory didn’t have too many options at the time when club stalwart Bobby Evans, an experienced Scotland international of some repute, called off with an injury and his replacement, John Jack, a reliable, if unspectacular, back-up, was similarly afflicted.

And, so, in front of a crowd of 39,000 supporters on a bright afternoon in the east end of Glasgow, Billy McNeill trotted out behind skipper Bertie Peacock, the Northern Ireland left-half, and goalkeeper Frank Haffey, making only his second appearance after his initial outing in a 4–1 win over Third Lanark at the end of the previous campaign. 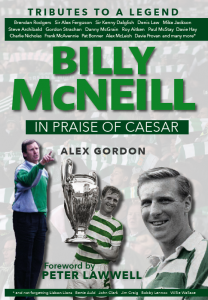 Bertie Auld, who accompanied McNeill out of the Celtic Park tunnel to be cheered onto the park that day, has hazy recollections of Celtic’s 2–0 triumph.

“Clyde had a good team in the fifties with individuals such as Harry Haddock, Tommy Ring and Archie Robertson in the line-up,” recalled Bertie. “We knew we would have to scrap to get anything from them – and so it proved. Going into the match, I was aware Clyde could go top of our section if they beat us.

“We were sitting on five points after three games – remember, it was two points for a win and one for a draw – and they were one behind. We were holders of the trophy, of course, following our win over Rangers in the final the previous year.

“The fans were still singing, ‘Oh, Hampden in the sun,Celtic 7, Rangers 1’ at all our games. The manager must have had a lot of faith in Billy at that age to bring him in.

“Naturally, I took the pressure off him with the second goal. I started off looking after Big Billy and it was something I got used to in all our years as team-mates! Seriously, I think Billy eased into the first team that afternoon. Even a blind man would have recognised his ability in the air.

“Bobby Evans, who played a lot of games at wing-half, was not tall for a centre-half and did most of his good work on the ground. So, it was a real change to see someone in our defence so dominant at dealing with crosses.

“It seemed prophetic we had a clean sheet in his first game.”

* TOMORROW: Heading for something extraordinary.