Billy Stark was Mr Reliable in the Hoops midfield during the club’s unforgettable centenary year after arriving in Billy McNeill’s summer rebuild of 1987.

Although he was seen as the perfect foil to the likes of Paul McStay, Tommy Burns and Peter Grant, he rarely hit the headlines with his thoroughly professional performances. Despite his consistency in the Hoops engine room, he was never deemed good enough to achieve a full Scotland international cap.

Here is Billy’s story in another EXCLUSIVE CQN feature.

BILLY STARK was Billy McNeill’s first signing for the club when he returned to Celtic in the summer of 1987.

It was an inspired bit of transfer work by the Hoops legend and the player gave the team extraordinary service for three years before he left to team up again with his good friend Tommy Burns at Kilmarnock.

Stark was one of several new Bhoys brought in the comeback gaffer, arriving around the same time as striker Andy Walker, a £350,000 purchase from Motherwell, and right-back Chris Morris, a £125,000 buy from Sheffield Wednesday.

Centre-back Mick McCarthy, bought from Manchester City at the cost of £500,000 as Davie Hay’s last piece of business for the club, was also waiting to make his debut. 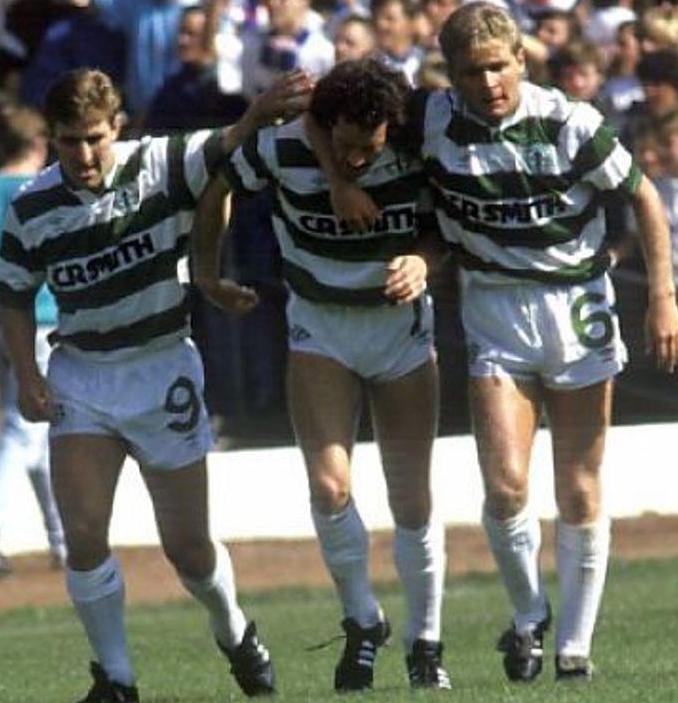 CHEERS…Billy Stark is congratulated by Mark McGhee and Peter Grant after his winner against Rangers in August 1987. 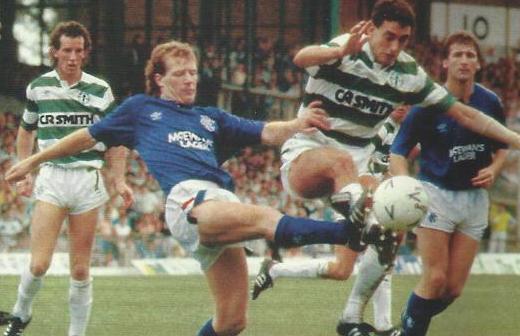 ON THE LOOK-OUT…Billy Stark watches as Paul McStay tussles for possession with Rangers’ Jimmy Nicholl.

McNeill added Joe Miller (Aberdeen) and Frank McAvennie (West Ham) as he rebuilt the team in the charge towards a glorious league and Scottish Cup double in the club’s memorable centenary year.

Stark scored on his debut in a 4-0 win over Morton at Cappielow on August 8 and really hit the headlines when he swept in the winner against Graeme Souness’ Ibrox side later in the month.

In February 1988, the vastly under-rated player followed up a rebound from a Peter Grant shot to knock in the extra-time winner in a crucial Scottish Cup-tie against Hibs at Easter Road and he kept his place for the title-clincher against Dundee at a sell-out Parkhead on April 23 when two goals from Walker sent the fans into raptures with a 3-0 triumph.

The following month, Stark played his part in the team’s fightback against Dundee United to lift the Scottish Cup following a double from the irrepressible McAvennie.

Stark was in place a year later when an opportunist goal from Miller gave the Hoops a 1-0 Scottish Cup Final victory over Rangers.

In all, he made 84 appearances for Celtic and scored 25 goals.

Stark, now 64, was also assistant manager to Tommy Burns in seasons 1994/97 and had three games as interim boss at the end of the 1997 campaign before leaving Parkhead for the last time that summer.

He became a key component for the Hoops, but never attracted the attention of Scotland.