The skyscrapaper Greek international striker claimed his first medal in 2008 after persuading Gordon Strachan to part with £2million to Manchester City after the frontman’s impressive six-month loan period.

Samaras had to wait until 2012 to lift another championship, the campaign under Neil Lennon that proved to be the launch pad for the record-equalling nine successive crowns.

The unpredictable forward, who could be a matchwinner when he was on form, fired in 74 goals in 249 competitive appearances for the Hoops while being awarded 81 caps for his country while knocking in nine strikes.

Memorably, Samaras brought down the curtain on the 2012/13 flag triumph, as author Alex Gordon describes in his fifteenth Celtic book, ’50 Flags Plus One’.

Alex investigates the highs and lows of each campaign during the club’s fifty-one championship victories since the first in 1893.

On this occasion, the acclaimed author turns the spotlight on Lennon’s second managerial title – and Celtic’s forty-fourth crowning glory. Here is an exclusive edited extract for CQN readers.

CELTIC’S topsy-turvy 2012/13 campaign could be summed up in the space of three games in seven days in October. Neil Lennon grimaced as he watched his champions carelessly throw away four out of a possible six league points with dire displays in stalemates against Dundee United at Tannadice, drawing 2-2 after leading 2-0 with a couple of minutes remaining, and 1-1 with St Johnstone at Parkhead after Tony Watt, with his third goal in as many games, had fired them into the lead.

In between these fairly frustrating tussles, Celtic, entering their 125th anniversary celebrations, managed to overwhelm European rulers Barcelona, Lionel Messi et al, 2-1 on an intoxicating evening in the east end of Glasgow that will live long in the memory banks.

Around the time, much was being made of the absence of their ancient Ibrox foes, now performing in the fourth tier. It was the first time since the league’s inception the Glasgow adversaries had been denied the opportunity to flex their muscles against each other. Following financial irregularities on a grand and unprecedented scale, Rangers had been voted out of the top flight and made to re-apply for a position in the league of which they had been involved as founding fathers in 1890. They were re-admitted to the bottom division and it took them four years to clamber back into the Premier League. Hysteria abounded, but Celtic adopted a diplomatic silence and got on with taking care of business. 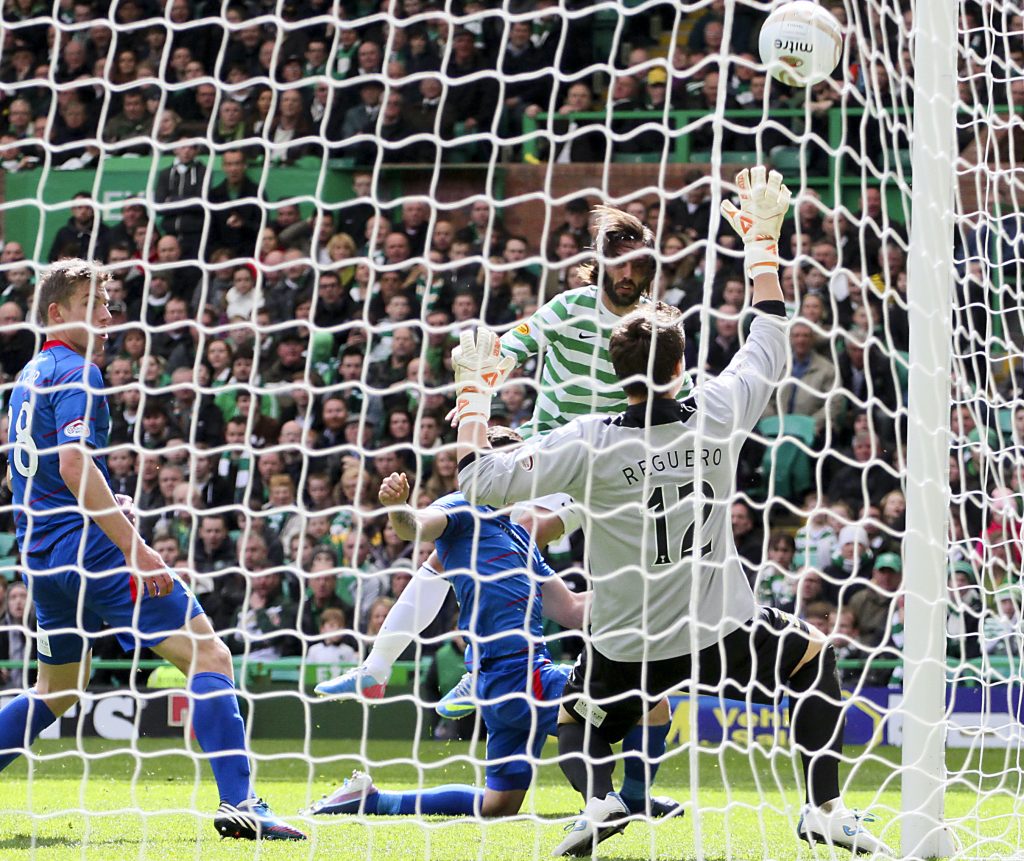 WALLOP…Georgios Samaras hammers in a scorcher against Caley Thistle on Flag Day.

As well as losing two league games at home to Kilmarnock (0-2) and Inverness Caley Thistle (0-1), Celtic contrived to surrender all three points on five occasions on their travels at St Johnstone (1-2), Hibs (0-1), Motherwell (1-2 and 1-3) and Ross County (2-3). It was not vintage stuff, but there were few dissenting voices when the club clinched the title with a 4-1 triumph over Inverness Caley Thistle on a bright Sunday afternoon at Parkhead on April 21 2013.

The doughty Highlanders, again stuffily well organised, made life difficult for the champions-in-waiting for the first hour. Thankfully, the roof fell in on them after that. Gary Hooper, who had never scored against Caley Thistle, claimed the opener in the sixty-first minute and Joe Ledley, captain for the day, thumped in the second five minutes later. Commons, who had set up the first for Hooper, repeated the feat in the seventy-third minute with a scorching low ball over from the left. The hitman, situated at the near-post, cleverly allowed the ball to pass through his legs before flicking the ball in off his left heel to flummox the keeper.

The best was kept to the last when substitute Georgios Samaras galloped onto a pass on the left wing with two minutes remaining. The unpredictable Greek international took possession and veered inside with Hooper again taking up excellent position in the box, obviously eager to mark the occasion with a hat-trick.

There was a sudden burst of pace from Samaras and, without warning, he unleashed an unstoppable angled drive over the flailing arms of keeper Antonio Reguero, startled and stranded at his near post, as it whooshed into the roof of the net. Aaron Dorran rolled one in for the visitors with virtually the last kick, but by then a bouncing Parkhead was in party mode. 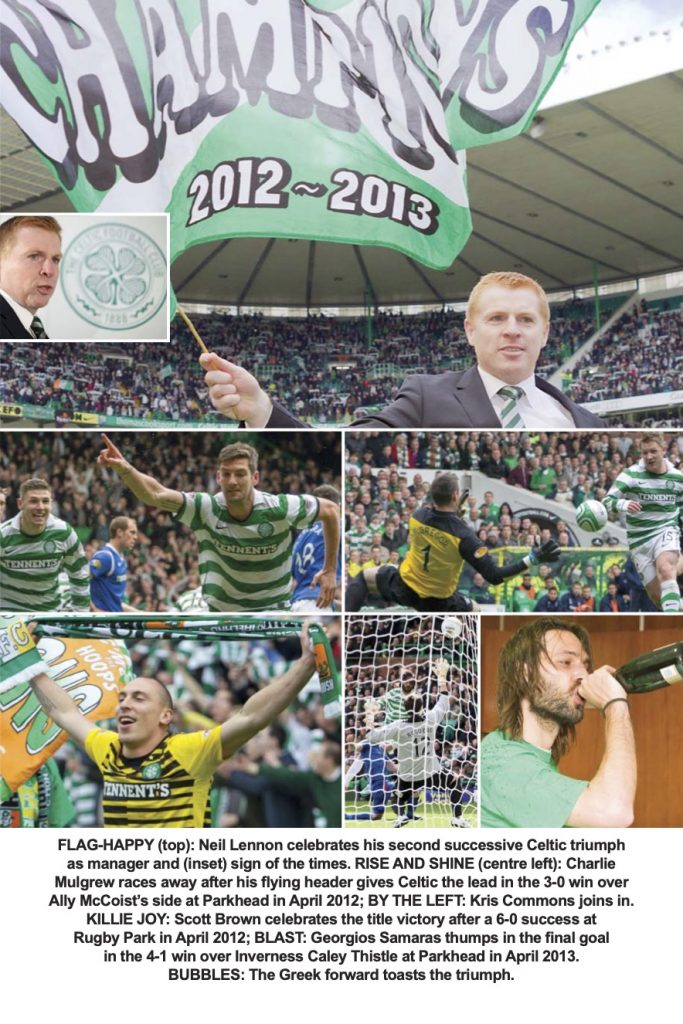 Afterwards, Neil Lennon, following a red-tape delay of fifteen minutes because he was serving an SFA touchline suspension, thanked the fans – a far cry from the last time Caley Thistle had been in town five months earlier – and added: “I’m proud of the players for the way they have played this season. The second-half was indicative of the way we have played in the three years I’ve been in charge.

“It’s pretty special and I never take things for granted. I know from my own personal experience over the years that winning the championship is the ultimate goal for any professional in football and I hope my players enjoy the moment.”

Lennon certainly knew what he was talking about; this was the seventh time he had been acclaimed a title-winner, twice as a manager and five times as a player. Beaten Caley Thistle manager Terry Butcher, an old Ibrox foe, sportingly conceded: “It’s hard to stop Celtic when they are in that mood and have the sniff of the championship.

“They could have scored more. Celtic are worthy champions, without a doubt.”

Another remarkable campaign in the history of one of the world’s greatest sporting institutions is told with insight and inside knowledge by author Alex Gordon, a former national newspaper Sports Editor, whose previous Celtic books include the autobiographies of club greats Bertie Auld, Tommy Gemmell, Davie Hay and John Hughes as well as the acclaimed tribute to Billy McNeill, ‘In Praise of Caesar’.