Celtic Quick News on News Now
You are at:Home»Latest News»BITTON EXTENDS STAY (DESPITE THE CRISIS)
By CQN Magazine on 2nd November 2015 Latest News
NIR BITTON has signed a new contract with Celtic which will run until the summer of 2020.

The 24-year-old Isreali international midfielder joined the Hoops from FC Ashdod in 2013 and has established himself as a mainstay of the team.

He said: “I have a great relationship with the manager and the backroom staff at Celtic. 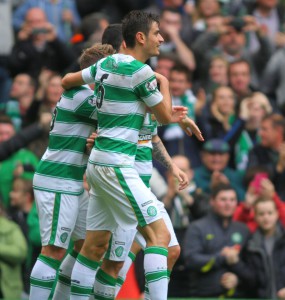 “I am so pleased to commit my long-term future to Celtic and I now look forward to doing everything I can to bring the club and our fans more success.”

Bitton, capped 16 times, endured a difficult start to his career in Scotland after being brought to the club by former manager Neil Lennon, but the arrival of Ronny Deila in the summer of 2014 signalled an upturn in the player’s performances.

He has won two Premiership titles and a League Cup and admits the decision to agree to a new deal was an easy one.

He added: “As soon as I got a new offer from Celtic, I had no questions about signing.

“When you play for a club like Celtic you don’t think twice.

“It’s a huge club, the best fans in the world and Celtic Park is one of the best stages in Europe, so I’m just delighted to extend my stay here.”