RONNY DEILA described Nir Bitton’s sending-off in the last-gasp 1-0 win over Partick Thistle as being a “little bit stupid”. 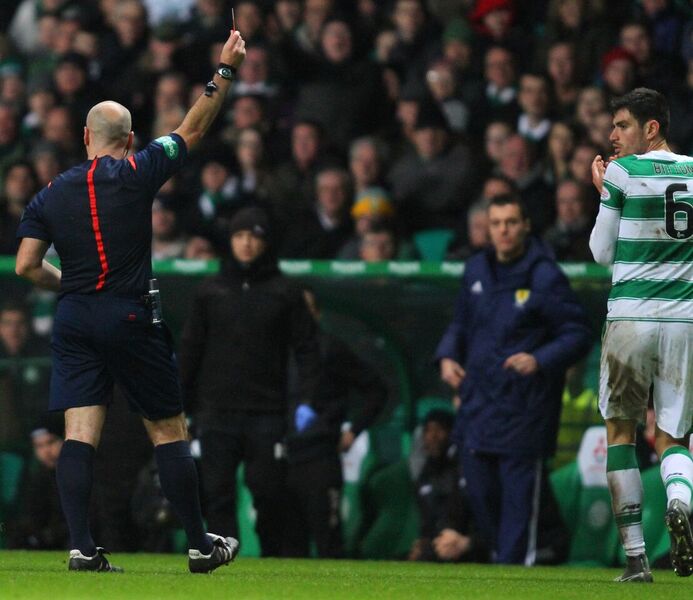 The Israeli international appeared to lose the plot in six minutes of madness when he was booked in the 61st minute for a foul on Stuart Bannigan, escaped further censure for a challenge on Abdul Osman and was yellow-carded again for a barge on Gary Miller only moments later.
Leigh Griffiths, who came on for Nadir Ciftci after the interval scored his 20th goal of the season to claim a stoppage-time winner.
Deila said: “I don’t think it was a red card. Having said that, it was also a little bit stupid because there was an incident before that.

“I don’t think that was a yellow card, either, and then the other one. Those two together made the decision for the referee. I think it was inexperience and something he (Bitton) needs to learn from.”

The win meant an end to a four-match winless run at home for the Hoops and Deila admitted afterwards the victory was a vital one.

He added: “You can call it relief, I will call it happiness. I am so happy that we scored and got three points.

“It was vital, of course, and it is about confidence, as well.

“You could see that we were a little bit anxious, the angles and pressing weren’t as normal. They were a good passing team, they kept the ball well and we couldn’t really get into the game.

“When Leigh came on we were the more dangerous. He went behind them and in the end got the chance we needed to win the game.”

Griffiths, who had missed four matches with a calf injury, admitted he was taken aback to get the nod from Deila at the interval.

He said: “I had only trained on Friday, so I was surprised when the gaffer came to me at half-time and told me I was going on.
“Thankfully, it paid off and I was able to tuck the goal away.
“If you can’t play with pressure, you shouldn’t be at a club like this.”