NIR BITTON is convinced Celtic can home in on another Europa League Group E triumph against Lazio at Parkhead tomorrow night.

Neil Lennon’s men are sitting top of their section with four points – one more than the Italians – after a 1-1 draw with Rennes in France and a 2-1 home win over Cluj at the start of the month.

And the versatile Israeli international is aiming for another glory night under the lights in the east end of Glasgow.

Bitton, speaking to this week’s Celtic View, said: “It’s a very hard group for us, although we have started well. The results show you that every team can beat each other in this group, so we’ll just to make sure that we don’t let anyone take points off us at Celtic Park.

“This is the most important thing for us. We need to be 100 per cent focused on the pitch and we’ll see what happens. 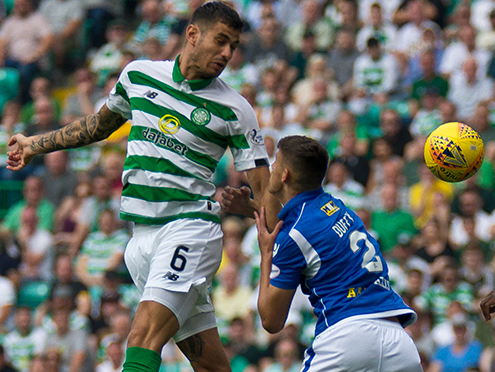 “When you’re part of a club like Celtic, there’s always pressure on you to win games and win titles, but everyone in the dressing-room understands that, even all the new players who’ve come in recently.

“It’s important for this club to be involved in Europe, whether that’s the Champions League or the Europa League. It’s a big stage for us, a big platform for us to show our qualities as individuals and as a team, and being in it we want to go as far as we possibly can.”

Bitton has fought his way back into contention after his injury in the 2-0 win over Steven Gerrard’s outfit at Ibrox last month.

Boss Lennon has been utilising the player’s skills in central defence this season in the absence of the injured Jozo Simunovic.

The Irishman has lacked cover in the heart of the rearguard, but Bitton has come up with the answers when he has been available.

He won’t let the Hoops down tomorrow night if he’s pressed into action, that’s for sure.