ALEX McLEISH took the blame for Scotland’s four-goal humiliation against Belgium in the friendly at Hampden last night.

The international gaffer, in his fifth game in charge after replacing Gordon Strachan, watched in horror as his error-strewn team presented the visitors with three of their goals.

And McLeish accepted responsibility for demanding his players to PASS the ball against the nation that took third place in the World Cup Finals in Russia in the summer.

It was the Scots’ heaviest defeat at the national stadium since a 5-0 loss to England in the SFA Centenary Match in 1973.

McLeish, who is now preparing for Monday’s opening UEFA Nations League encounter against Albania at the same venue. said: “Mistakes cost us.

“I thought we were doing okay in the first-half, then we made a mistake and lost a goal. At this level, against a team of this stature, the consequences are devastating. 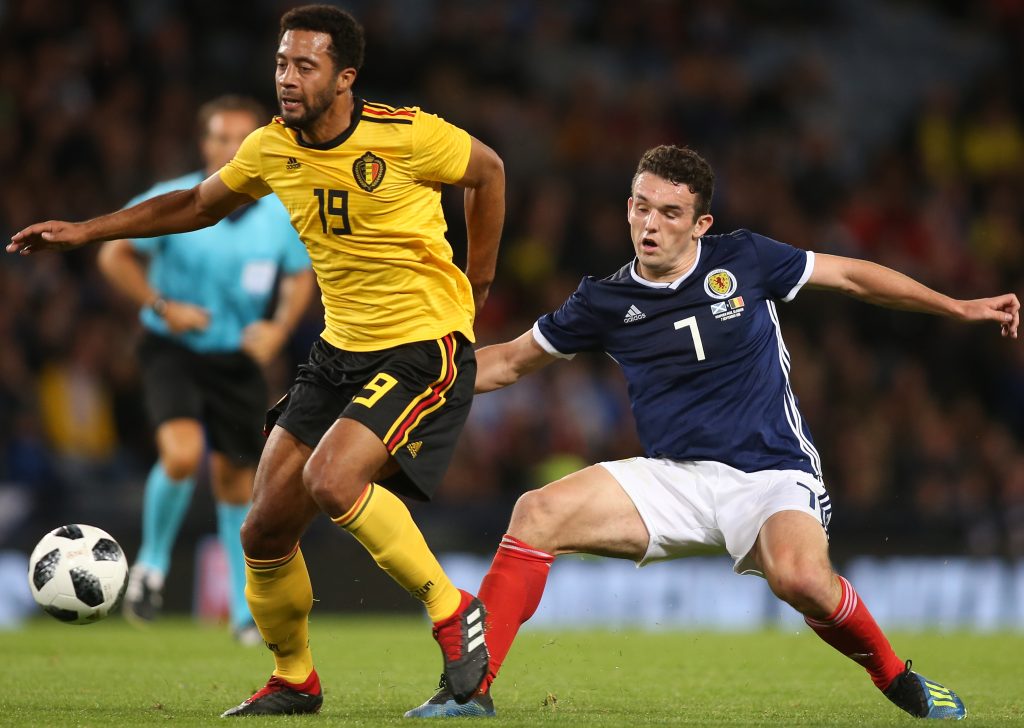 OOPS…John McGinn is robbed of the ball by Mousa Dembele in the prelude to the opening goal. Pic: Geo.

“What we have encouraged is for guys to pass the ball. The guys have to learn fast. They are young guys, they have just broken into the team in the last year or so and they were playing a team of world superstars.

“It looked the best choice for me. We have got to test ourselves. But for the first goal we are probably going in at half-time all square. The second-half was a catalogue of errors.

“If anybody has to take the blame it is me for telling them to pass the ball. I know Charlie Mulgrew can pass the ball. Ryan Jack got caught on the ball. It is harsh lessons for the young boys.”

McLeish revealed he took off Leigh Griffiths, who was involved in a first-half collision with Jan Vertonghen, at half-time as a precaution ahead of the Albania game.

He added: “I think he wanted to play on in he second-half. I felt he was too stop-start. I thought it was better taking him off.”

FOR THE RECORD: McLeish returned to the Scotland job in February and has seen the team lose four out of five games – Costa Rica (0-1), Peru (0-2), Mexico (0-1) and now Belgium. The solitary win came against Hungary in Budapest in March when Matt Phillips scored the only goal of the game.