Celtic Quick News on News Now
You are at:Home»Match Report»BLOWN AWAY IN BAVARIA
By CQN Magazine on 18th October 2017 Match Report

CELTIC were swept away by an unstoppable red tide at the Allianz Arena this evening.

Bayern Munich, one of the favourites for the Champions League, were a class above Brendan Rodgers’ side who contributed hugely to their own downfall.

The Hoops’ passing was more sloppy than classy and time and again they gifted possession to the eager Germans.

Danger signals were flaring as early as the sixth minute when Robert Lewandowski got to the right bye-line before zipping a ball across the penalty area to Thiago who thundered an unstoppable effort into the roof of the net.

Russian referee Sergei Karasev cut short the celebrations when he ruled it out indicting the ball had crossed the line before the Polish star connected. TV pictures showed it to be an extremely tight decision.

A minute later, Mikael Lustig, playing in central defensive for the injured Jozo Simunovic with Cristian Gamboa at right-back, pulled back Lewandowski who got away from him far too easily in the box. It could have been a penalty-kick, but the world-rated striker went down just a bit too theatrically for the match official who waved play on. Craig Gordon’s goal came under siege and Joshua Kimmich fired one wide before David Alaba blasted one wildly over the bar. Celtic were penned in and most of their passes forward to Leigh Griffiths were hit more in hope than with accuracy. It was no surprise when Bayern claimed the breakthrough goal in the 17th minute, but the defending was alarmingly slack when Thomas Muller walloped the ball into the net from four yards.

Kimmich was under no pressure as he delivered the ball into the box from the right. Dedryck Boyata and Lustig allowed Lewandowski to drift behind him and Gamboa was hopelessly slow in coming out, playing the forward well onside.

Gordon made a remarkable plunging save to his left to push away the Bayern ace’s free header smack in front of goal, but, unfortunately, it fell to Muller who reacted quicker than Kieran Tierney to the rebound.

The World Cup winner gleefully slammed the ball home while the Celtic defenders looked accusingly at each other.

In the 24th minute, Kingsley Coman had a low drive well held by Gordon, but five minutes later he was picking the ball from his net for a second time.

French Under-21 midfielder Coman simply raced away from the toiling Gamboa on the left before sending over an inviting cross to the back post. 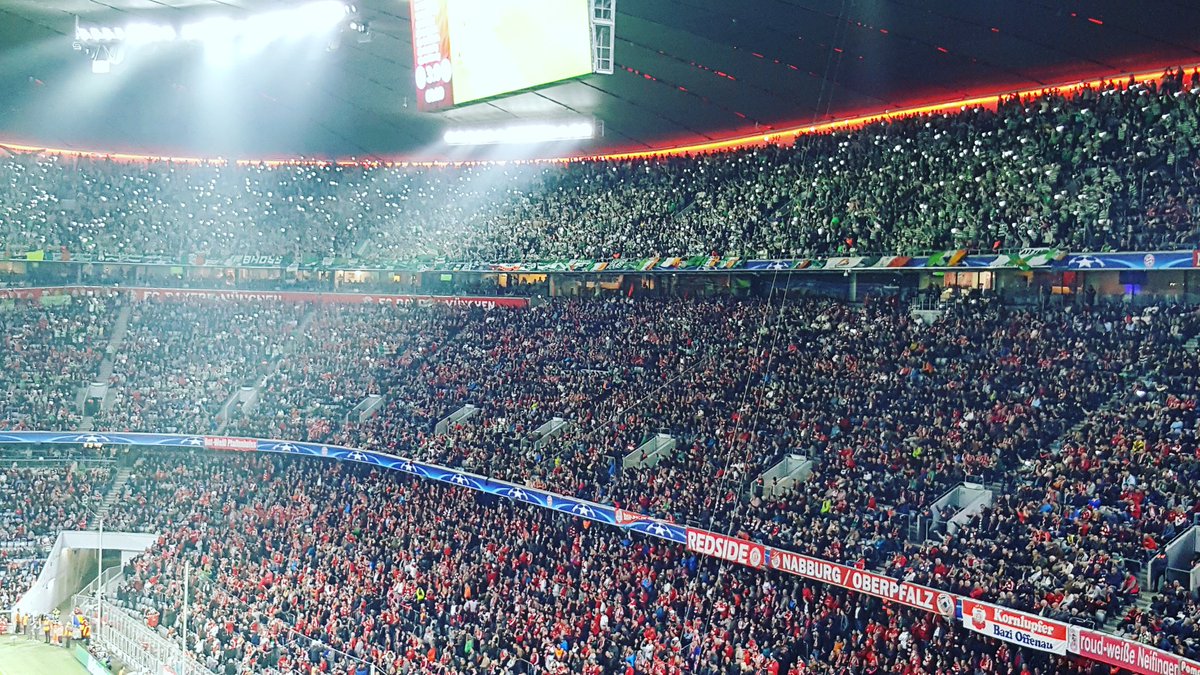 His team-mates were forming a queue as the ball eliminated the Hoops defenders and, with Scotty Sinclair slow to help out, Kimmich had time and space to propel an unsaveable header into the roof of the net beyond a helpless and static Gordon.

Celtic went in at half-time without having a single shot on target to trouble stand-in keeper Sven Ulreich.

Six minutes after the interval, Gordon was loose with a clearance to Scott Brown. The skipper was robbed and Arjen Robben’s shot was cleared for a corner-kick.

The Dutchman took the right-wing award, swung it into the middle and Mats Hummels had the freedom of Bavaria as he raced in to plonk a header into Gordon’s right-hand corner.

Someone on the post would have undoubtedly cleared the effort, but there was no-one there to help out.

A mere 10 second afterwards straight from the kick-off, Olivier Ntcham was way off beam with a backpass and the ball went straight to Lewandowski.

The Pole was so startled by the gift, he rushed his shot and it was blocked by Boyata and eventually punched clear by Gordon. It was going to be a long second period for Rodgers’ team.

In the 53rd minute, Ulreich was given something to do when Tierney forced in an angled drive, but the keeper flopped on the ball after blocking the initial effort.

In the 61st minute, Robben got his head to a left-wing corner-kick and his attempt flew past the motionless Gordon, but was cleared at the post by Gamboa.

Four minutes afterwards, Rodgers sent on Moussa Dembele and Tom Rogic for Griffiths and Stuart Armstrong as he tried to revitalise his team. 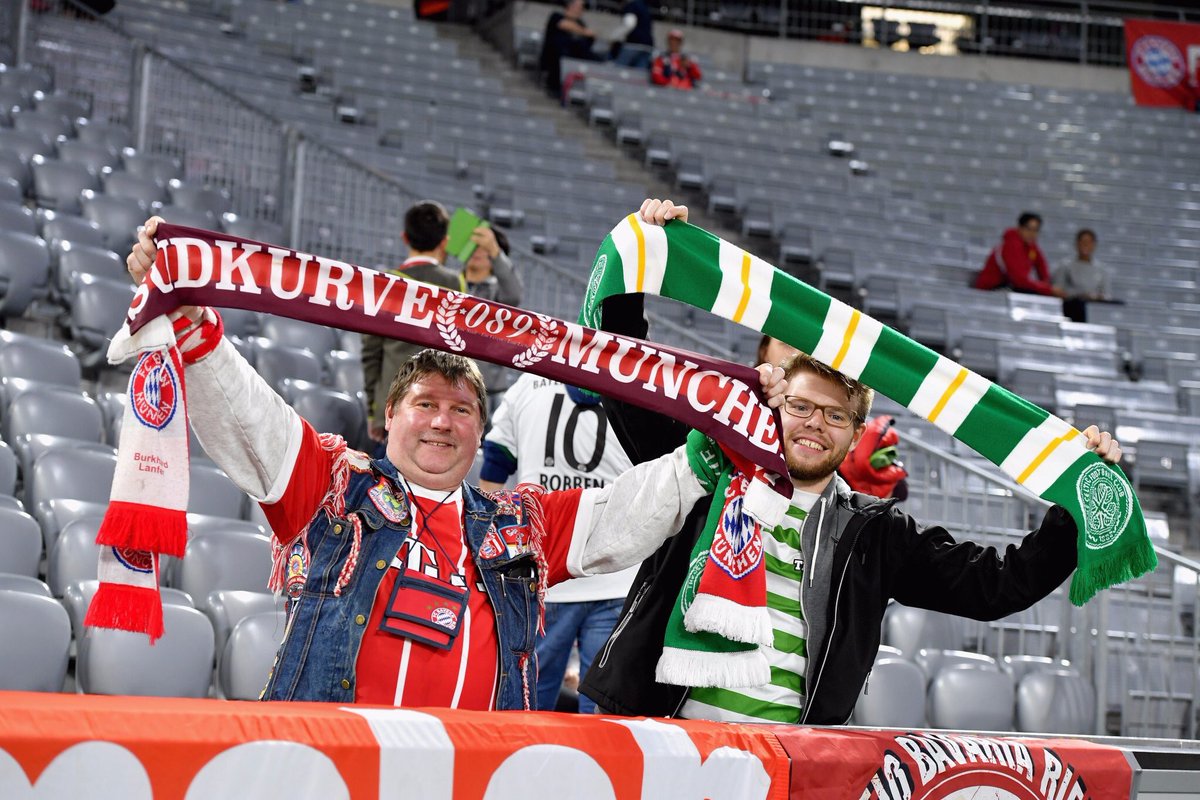 Tierney tried to show the way when he surged forward to unleash a long-range left-foot piledriver that appeared to take a touch off the keeper’s glove before crashing against the outside of the upright.

In the 73rd minute, Gordon made a fabulous sprawling save from Robben and a minute after that Sinclair and Rogic had shots blocked in quick succession by the scrambling Ulreich.

James Forrest replaced the tiring Roberts in the 78th minute and four minutes later the little winger scampered past a couple of challenges before his angled drive was punched away by the keeper who was suddenly being asked to earn his bonus.

In the 86th minute, though, he was helpless when Dembele’s mishit shot fell to Sinclair who swept a curling effort over the goalie’s left-hand shoulder.

It looked like a consolation for the visitors, but they were denied even that when the Russian linesman flagged for offside. It was an extremely marginal decision.

The game came to a halt with Gordon making two excellent saves from substitute Vidal and Muller. 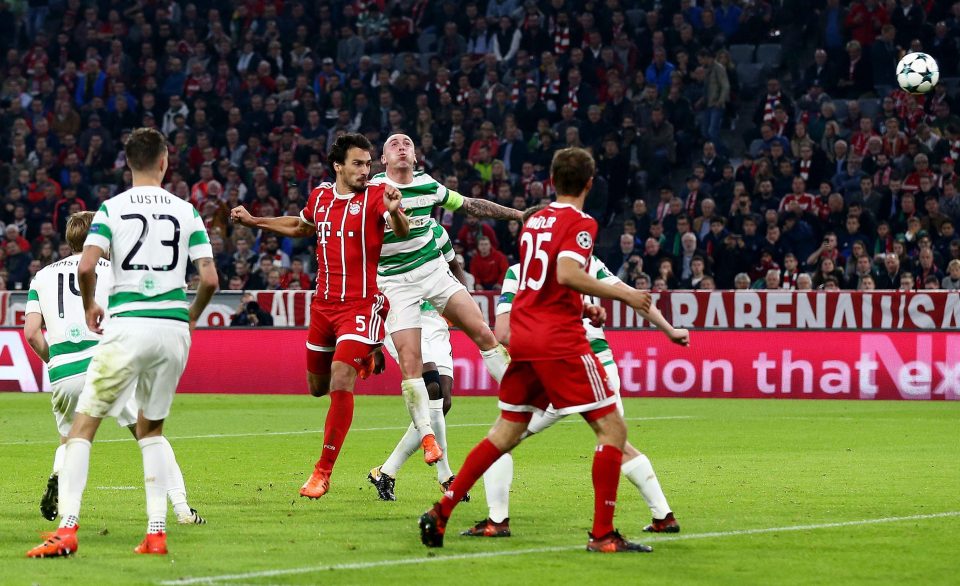 It was a punishing, gruelling experience for Celtic, but all the focus must now be on Hampden on Saturday and the League Cup semi-final against Hibs.

This was is in the history books and Bayern would have overwhelmed most teams on this form.

Now it’s all about getting the preparation right for Neil Lennon’s Easter Road men.