BLUNDERING Boli Bolingoli is on his way back to Celtic following the dramatic collapse of his loan move to Russian club FC Ufa.

It looked as though the Hoops had found a solution to the problem concerning the frozen-out Belgian left-back, who has made only two starts in two seasons.

Bolingoli agreed a temporary transfer with Ufa until the end of the season, but the contract has been scrapped after he failed to obtain a work visa due to the ongoing war in Ukraine.

The defender, who cost £3million when he arrived at Parkhead from Rapid Vienna in July 2019, was dumped by the club after it was discovered he had broken strict government Covid regulations for an unauthorised hush-hush trip to high-risk Spain in August 2020. 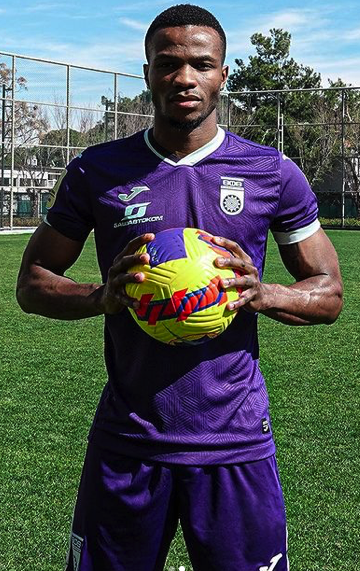 TURK IT OR LEAVE IT…Boli Bolingoli in FC Ufa’s colours during his ill-fated stay at the Russian club’s Turkish training camp.

Bolingoli, following a cameo substitute appearance in the 1-1 draw with Kilmarnock at Rugby Park only days after his return, was packed off to Turkish champions Istanbul Basaksehir for the remainder of the season. However, they failed to offer a permanent contract and the 26-year-old misfit returned to Glasgow.

Ange Postecoglou gave him two surprise outings against Livingston, a 1-0 loss in West Lothian in September, and Motherwell, a 2-0 win at Fir Park the following month, before he faded from the first-team picture.

The errant player joined up with Ufa at their Turkish winter training camp, but, with their Premier League due to resume next week, Bolingoli has been unable to overcome red tape regulations due to diplomatic relations between the UK and Russia after their invasion of Ukraine.

The outcast has made only 31 appearances for the Parkhead club and is still under contract until June next year.