NEIL LENNON believes the Celtic fans will see the real Boli Bolingoli as the season progresses.

The Belgian left-back was far from convincing during his 37 minutes on the pitch during the 5-0 Champions League qualifier against Nomme Kalju last week.

Bolingoli, bought for £3million from Rapid Vienna last month, seemed to be a slightly wayward cog in the Hoops formation as he veered in from the wing cutting off options for his colleagues to utilise threats from the flanks.

He left before the opening half was over and Lennon later claimed the player was suffering from a virus. The attack-minded defender went off only one minute after Kristoffer Ajer had blitzed in the opening goal with a thunderous header. Mikey Johnston came on in his place, the team looked to have a better balance and tactical awareness and were three goals to the good before the interval.

However, there was a more assured, disciplined and measured performance from Bolingoli this week when the champions finished the job with a 2-0 victory for an emphatic 7-0 aggregate scoreline to line up a third qualifier against Cluj with the first leg in Romania on Wednesday.

“He looked really off it last week and I don’t know whether that was down to the virus or not. He was more like himself offensively and defensively. 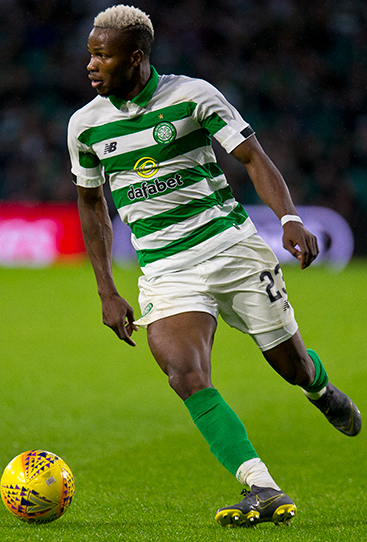 “His fitness levels were good so, yeah, a much more rounded performance from him.

“We’re only talking a couple of weeks in a new country and people are expecting the new signings to hit the ground running.

“The problem is that they have to, but the more games he gets under his belt the more au fait he gets with life and the training and the players and the better he will get.

“We had a chat with him on Saturday morning and he had a good run-out in a bounce game against Man City for 45 minutes. He has then played the 90 in Tallinn and that looked more like him.”

Lennon, though, was quick to stress he is STILL seeking reinforcements for the No.3 position.

Asked if Boli could fill the void, the Irishman answered: “Yes, but we would look to bring another one in as well if KT goes. I don’t think there’s any question that we would have to do that, anyway.”