The 26-year-old defender signed off with a screamer of a goal after running 50 yards from his own half into Slavia Prague’s danger zone before unleashing an unstoppable right-foot drive that swept high into the helpless keeper’s left-hand corner of the net.

The Europa League play-off tie ended 2-2, but Juranovic will not be around for the return next week – instead he will be a Celtic player preparing for the first Glasgow derby of the campaign at Ibrox a week on Sunday. 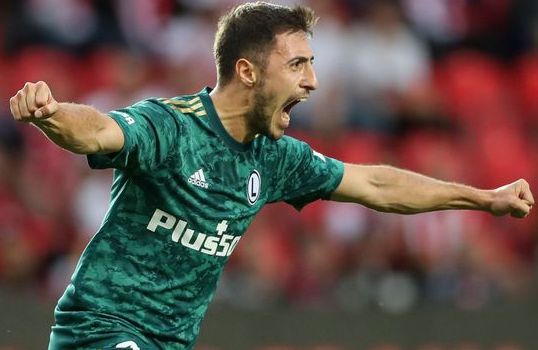 FAREWELL YELL…Josip Jurnanovic races away in joy after thumping in a glorious goodbye goal for Legia Warsaw.

Forty-one-year-old Boruc is winding down his career at his boyhood favourites and made his way to the centre circle to embrace his departing team-mate.

Juranovic was the last player to leave the field as he made a solo walk towards the pocket of travelling supporters to wave goodbye.

Now he is expected in Glasgow today to finalise his £2.5million switch from the Polish aces.

Twenty-six-year-old Juranovic will be hoping to emulate the four-year successful spell the colourful shotstopper enjoyed at the Hoops before his move to Fiorentina.