FORMER Celtic fans’ favourite Artur Boruc is in line to make a final appearance for the Hoops.

The colourful and controversial keeper, who had an eventful five-year career at Parkhead after Gordon Strachan signed him from Legia Warsaw in July 2005, could play for BOTH clubs in his farewell performance in the Polish capital a fortnight tomorrow.

Boruc, who is retiring at the age of 42, would welcome the opportunity to play one last time for Celtic and could perform at some stage for Ange Postecoglou’s side, according to a report in local media. 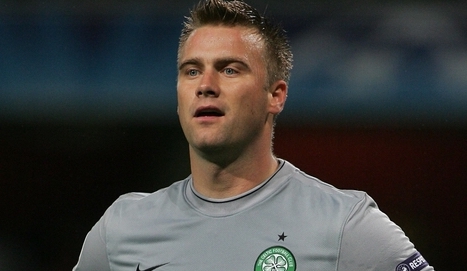 FAREWELL…Artur Boruc aims to go out in style when Celtic take on Legia Warsaw.

However, both clubs will have to agree with the arrangement and get permission from relevant football authorities before the switch can be given the green light.

Lou Macari played for the Hoops AND Manchester United in his testimonial match at Old Trafford back in 1984 which ended in a 1-1 draw.

Now Boruc could follow the one-time Scotland international striker by doing likewise when Legia and the champions lock horns.

The 65 times-capped Poland international No.1, who joined Serie A outfit Fiorentina in July 2010 before coming back to the UK with Southampton and Bournemouth, returned to his homeland two years ago.