DEREK McINNES has accused Kristoffer Ajer of “laughing” at Sam Cosgrove following the Aberdeen striker’s red card in his side’s 2-1 defeat at the weekend.

The Dons boss aimed a ferocious verbal volley at the Celtic defender following the ordering-off incident in the second-half of a dramatic confrontation at Parkhead.

Ajer was on the receiving end of what appeared to most of the sell-out crowd as a reckless challenge from the Englishman.

He collapsed in a heap, but the Pittodrie gaffer insisted the Norwegian international was “laughing’ and “winking” at Cosgrove.

McInnes said it was a “brilliant” tackle and also claimed afterwards Hoops chief Neil Lennon agreed it had not been a red-card offence.

The Dons manager, speaking to the Evening Express, insisted: “You have Big Ajer winking at him and laughing at him lying on the ground.

“If Sam hits Ajer going at that speed, Ajer is hurt. The boy was clearly not hurt.

“I thought it was a poor decision. We will 100 per cent appeal it. 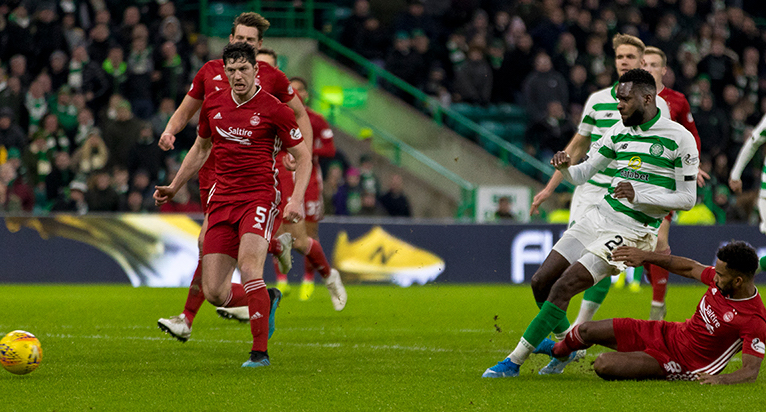 SWEET SIXTEEN…Odsonne Edouard slides in the winner against Aberdeen for his 16th strike of the season.

“I spoke to the referee and I thought he had a good game. He thought that Sam has caught the player with his leg, but I have seen it again and he has not.

“If he goes in at speed and hits the player at any point then you can understand the referee sending him off.

“When you go in at speed like that you have to make sure you get the ball and 100 per cent it is a brilliant tackle.

“I have watched it 20 times now, Cosgrove won the ball cleanly. It is actually a great tackle and he just goes into it with a bit too much speed which gives the officials something to think about.

“The referees and officials need to be better than that.”

McInnes added: “VAR could have helped out, but you still need the referee to make the right decision

“After the game, Neil Lennon, and it is easy for a winning manager to say this, but he said that no way was it a red card. He thought we had been harshly treated there.

“Celtic were 2-1 up, they are a strong team, they are going well, so there is nothing to say that it changes the course of the result. But it certainly gives you a better chance if Cosgrove stays on.”

It’s the second time Cosgrove has been dismissed in a game against the champions. He was also banished in a match at Pittodrie after taking a swipe at Scott Brown who was on the ground at the time.