STEPHEN ROBINSON admits his Motherwell team “don’t have loads of respect” for Celtic as they prepare for Sunday’s Premiership encounter at Parkhead.

The Well boss also insists the Fir Park young players will have no fear at visiting the home of the seven-in-a-row champions who are bidding for title No.8 in this campaign.

Robinson has introduced teenagers Jake Hastie and David Turnbull in recent weeks as the team have won their last six games.

The Lanarkshire side’s gaffer said: “They go there with a freshness and the young mentality of having no fear.

“They don’t have loads of respect – and I mean that in the best possible way. They just go there and try to play football.

“I think they can handle it, but we need to perform to the same levels. To get anything at all from Celtic Park, you need to play at the best of your ability and your goalkeeper needs to have a very good game.

“When you are a bit older and wiser, you think about things a bit more. But if you can’t go into the game confident after six wins a row, then you never will.

“It is a tough game against a good side, but we will try and play the same positive way we have been doing.” 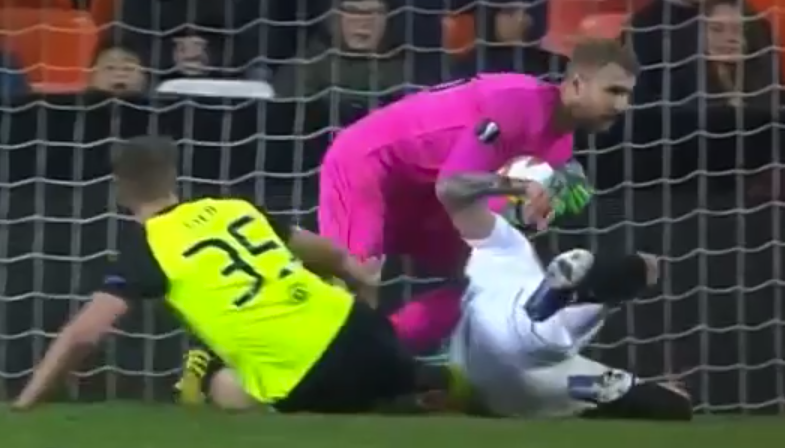 WELL HELD…Celtic keeper Scott Bain gets down to hold a close-range Valencia effort.

Robinson isn’t banking on Brendan Rodgers’ side being tired and jaded after their 10 men gallantly lost 1-0 to Valencia in the Mestalla last night when a major refereeing decision swung the tie in favour of the Spaniards, who were already 2-0 up from the first leg.

The champions and to play for 53 minutes with a man short against a team fired up in front of their own fans.

Until the red card, Rodgers had seen his team dominate opposition that have lost only four domestic games all season.

Robinson added: “With a squad of Celtic’s size, I’m not sure how much of an advantage the Valencia match will be.

“Even if Celtic put out a B side, they would be up there in the top two of the league.

“They are a strong outfit and I don’t think that will have much of an influence. They are a top football side and they continue to do it, their standards are so high.

“It is a tough task for any team in the Premiership to go there and get a result. But, we are a bit of the unknown. We have boys who have come in and given us a freshness.”