Celtic Quick News on News Now
You are at:Home»Latest News»BOSS DEMANDS MAGICAL 90
By CQN Magazine on 11th May 2019 Latest News

NEIL LENNON is urging his Celtic players to end the season on a high with a hat-trick of victories as they zero in on the unprecedented treble treble.

The interim manager will take the champions to Ibrox tomorrow, then they bring down the curtain on their eighth successive Premiership-winning campaign against Hearts at Parkhead a week later and then take on the Tynecastle outfit again in the Scottish Cup Final at Hampden on May 25.

Lennon admitted he was looking forward to the confrontation against Steven Gerrard’s men this weekend. 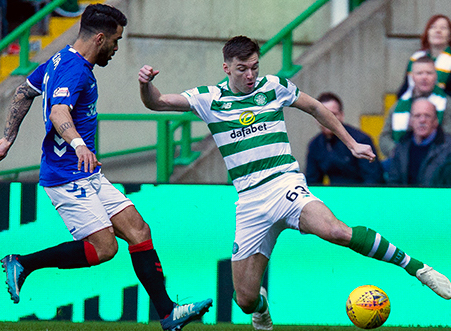 ON THE BALL…Kieran Tierney takes on Daniel Candeias.

The Irishman, speaking to the Celtic website, said: “I’m excited. We go into the game as champions. We’re in great form and Rangers are as well. It’s a game I think everyone’s looking forward to, no more so than myself.

“It’s been a while since I was at Ibrox as Celtic manager. It’s always a good occasion to look forward to.

“We know what to expect. Rangers are a formidable team at home. It’s a great game with an electric atmosphere. It’s a game for any player involved with Celtic to look forward to and thrive on.

“We’re going to have to play well and play strong. It’s not a meaningless game by any stretch of the imagination. We have our own targets and motivation for the game.

“We have a huge Cup Final to look forward to at the end of the month. I would like us to finish on 90 points. At the minute we’re on 84 so we need two wins to get that and that’s what we’re going to try to do.

THAT’S TORN IT…Mikael Lustig with his ripped shirt in the aftermath of the melee in March.

“You only have to look at the games this season to see how competitive and high octane the games have been. I expect nothing less on Sunday.”

Lennon enjoyed success against the Govan outfit in the east end of Glasgow in March in a confrontation that ended in chaos.

Alfredo Morelos was red-carded for smashing an elbow into Scott Brown’s face, Ryan Kent then punched the Hoops skipper in the immediate aftermath of James Forrest’s winning goal and Andy Halliday picked up a second yellow card following a rammy after the final whistle.

On top of that, Gerrard was also banned from the dug-out for one game after remarks to referee Bobby Madden.

It could be a fairly hectic afternoon for tomorrow’s match officials!