The Celtic winger, who won his first cap in 2011, finally broke his scoring duck in his 25th appearance for his country when he fired in a superb double in the 4-0 triumph in Albania at the weekend.

And the 27-year-old touchline terror added a hat-trick in the 3-2 victory over Israel at Hampden on Tuesday to steer his country to crucial back-to-back wins to push them to the top of their UEFA Nations League group.

The Hoops gaffer was in the stand alongside his assistant Chris Davies to see the Parkhead trio of Forrest, Ryan Christie and Callum McGregor strut their stuff for Alex McLeish’s side.

Rodgers said: “It was great, they arrived into the game knowing they had to win, so it was great for Alex, his staff and the players.

“The Celtic players were absolutely outstanding in that, I felt. James is getting into areas quicker to affect the game. 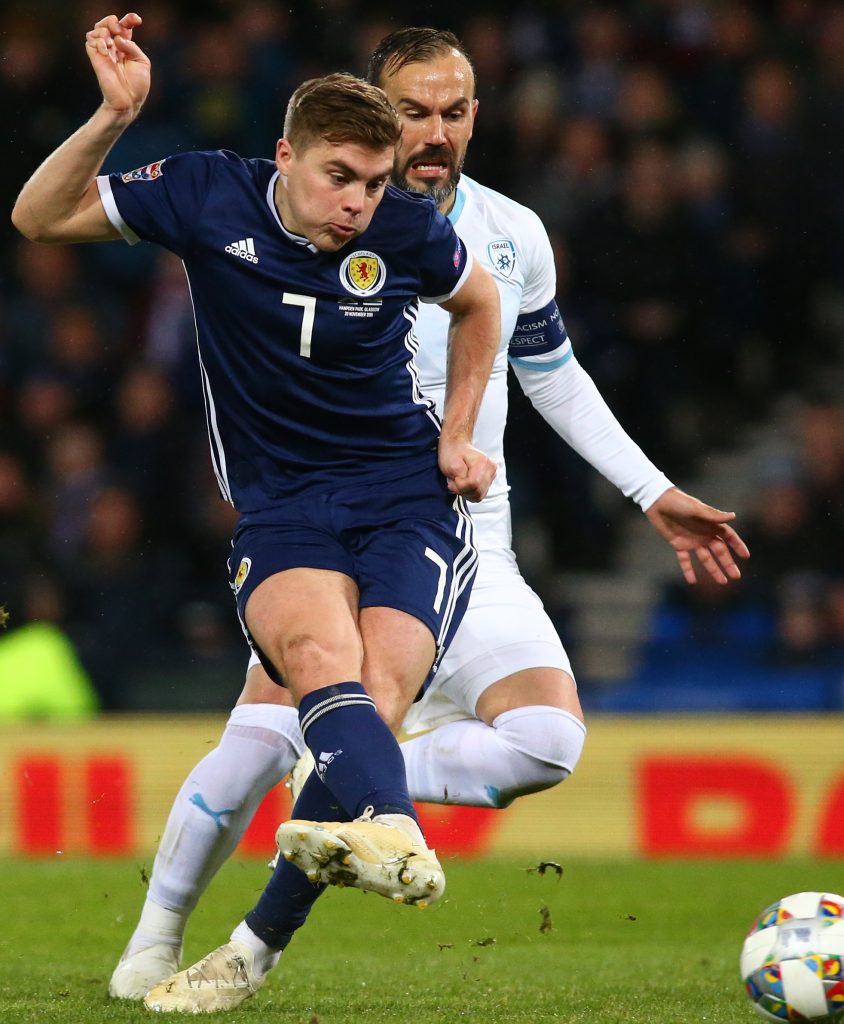 HAT-TRICK HERO…James Forrest slots in No.3 in the win over Israel. Pic: Geo.

“He’s just getting better and better and has terrific attributes for international football.

“James is quick and is a wonderful technician – his goals, touch and finish, he makes it look simple, but none of them were simple.

“He thoroughly deserves it, he’s ultra-professional and remains humble with it all, so it is great for him.

“And he has gained confidence from scoring and is now producing it at the highest level.

“I’m just glad he is getting the recognition for the quality he has.”

Forrest will hope he can replicate his international form when he lines up for the champions against Hamilton Accies tomorrow afternoon on their notorious plastic pitch.

The winger and his team-mates drew a blank just under a fortnight ago in the scoreless stalemate on the artificial surface at Livingston and the on-fire attacker will be out to make absolutely certain there is no hint of a slip-up this time around.