The Spaniard paid a Scottish transfer fee of £25million to lure the left-back from Celtic in the summer.

However, Tierney didn’t even get a kick of the ball against his former Hoops manager’s team as he sat on the substitutes’ bench for the entire 90 minutes at the King Power Stadium.

The Gunners toiled as Emery notched up his fifth successive game without a win. 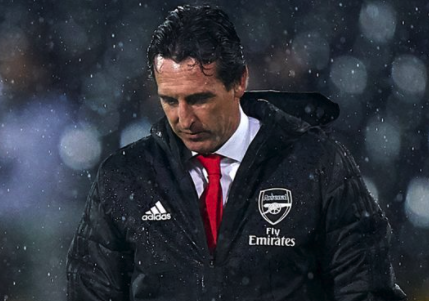 UNDER PRESSURE…Unai Emery has gone five successive games without a win.

He also started with £70million Nicholas Pepe beside Tierney on the touchline, but, at least, the winger was introduced to the action in the second-half.

There are now calls to sack Emery, who replaced Arsene Wenger, almost 22 years in the Emirates hot seat, last summer.

Rodgers’ team were good value for their win with second-half strikes from Jamie Vardy and James Maddison.

The frustrated supporters took to social media to register their anger at Emery as they demanded to know why Tierney did not play ahead of Bosnian international Sead Kolasinac.

The Scotland international, who underwent a double hernia operation at the end of last season, has made only seven appearances for his new team since his big-money switch.