KRISTOFFER  AJER hobbled off in the fading moments of Celtic’s 3-1 Premiership triumph over Hearts at Parkhead yesterday.

But Neil Lennon was swift to dismiss scares the Norwegian defender would be forced to miss the Europa League second leg play-off against AIK Stockholm on Thursday night.

The Hoops travel to Sweden to protect a 2-0 advantage and Ajer is likely to be a key man again in the back four.

The 21-year-old utility star, who has been a stand-out stand-in at right-back and set up the third goal against the Tynecastle side, sparked fears after he was replaced late in proceedings by Anthony Ralston.

A week earlier, Olivier Ntcham came on after the player had to go off in the 76th minute with a shoulder knock in the 2-1 extra-time League Cup win over Dunfermline. 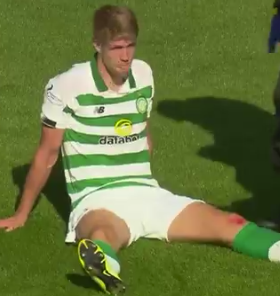 But Lennon expects the giant defender to be in place against the Swedes.

The Irishman, speaking to the Evening Times, said: “Kris had a bit of cramp and a knee problem. He also has a shoulder injury.

“Apart from that, he is okay! He should be fine.”

Hatem Abd Elhamed missed the win against Craig Levein’s side through injury, but he, too, should be ready for action this week.

That could see Ajer move back to his more recognised position in the heart of the rearguard.