Neil Lennon brought in the pair while leaving Jeremie Frimpong and Kristoffer Ajer on the bench for the entire 90 minutes.

Ehamed and Bitton put in excellent shifts against admittedly inferior competition who were on the back foot as early as the sixth minute when Mohamed Elyounoussi opened the scoring following a raking pass from centre-back Christopher Jullien.

Lennon was more than satisfied with the showing of the international duo and, speaking to the  Daily Record, said: “Nir had a good game alongside Chris.

“He’s been knocking on the door. He’s had a really good couple of weeks in training. I think he is a good player and he deserved the opportunity.

“It was the same for Hatem. Kris Ajer and Jeremie Frimpong haven’t done a lot wrong, but it’s good to rotate it and also give those boys some game time.

“Otherwise, they get discouraged if they keep showing up well in training and don’t get the opportunity.” 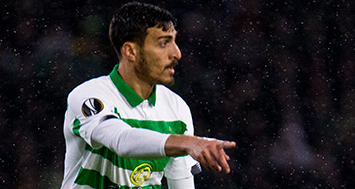 POINTING THE WAY AHEAD…Hatem Abd Elhamed made an impressive return.

Lennon was also happy to see left-back Greg Taylor claim his first Hoops goal with a close-range header shortly after the turnaround. A deep provided by full-back partner Elhamed to the back post provided the breakthrough effort.

The Scotland defender, who arrived at Parkhead in a £2.25million switch from Kilmarnock on the September 2 deadline day last year, is hardly a noted marksman – last night’s counter was his second in his career.

The boss added: “I was delighted for Greg. It was a great ball from Hatem and there was a good variety of goals. I was pleased with them all and also the set-play goal from Jullien, I was delighted with that.

“I think we can be a potent threat at set-plays and I have to say that I think Ryan’s deliveries in the games so far have been excellent. That is another aspect that we have worked on.”

THE JOY OF SIX